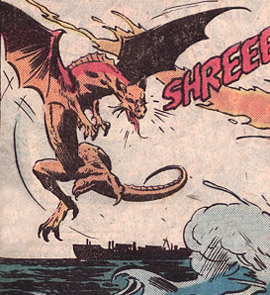 Batragon is one of Dr. Demonicus' mutant monsters used to oppose Godzilla in the Marvel Comics universe. First appearing in the north Pacific, attacking oil tankers, Batragon is the first of the mutant creations of the mad villain Dr Demonicus. Exposing a bat to the radiation of the strange meteor he dubbed the 'Life Stone', Dr Demonicus created Batragon as a living weapon in his vendetta against the world, using him to cripple cargo tankers, that his mercenary demon soldiers might capture them and bring the resources back to their leader. However, on one of these missions, Batragon ran afoul of Godzilla, and was forced to retreat back to Dr Demonicus' base in the Aleutian Islands. Godzilla followed the injured monster, and arrived on the island to continue their contest. Filled with new strength from the Life Stone and seething with a desire for revenge, Batragon actually succeeded in breaking through the energy field maintained by Demonicus to keep his monsters caged in the bowl of a dormant volcano. Injured by his passage through the field, Batragon nonetheless attacked Godzilla, savaging the reptile with fang and claw, causing the titanic reptile to lose his footing on the mountain slope; however, Godzilla managed to lock Batragon in his grasp before falling towards the ground. As soon as the two made their impact on the ground, Godzilla immediately retaliated with a burst of frenzied strength and quickly smashed the bat monster underfoot, crushing the life from the mutant monster, who burned him to dust with the Atomic Breath for good measure.

Range: Tens of meters range due to size

Weaknesses: The monster is, however, dependent on the radiation of the meteoric Life Stone, and must return to it frequently to replenish his strength. The monster also displays a weakness to electricity, being kept caged by a field of crackling energy when not allowed to roam free by Dr Demonicus.

Retrieved from "https://vsbattles.fandom.com/wiki/Batragon?oldid=5454654"
Community content is available under CC-BY-SA unless otherwise noted.