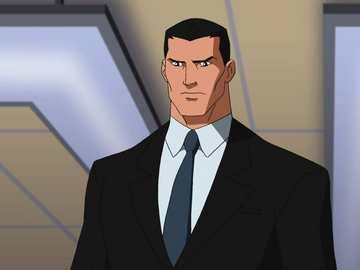 Batman (real name Bruce Wayne) is a crime-fighter from Gotham City and a founding member of the Justice League. When Nightwing was still Robin, Batman was his mentor; since then, he has gone on to mentor several other protégés, including a new Robin and Batgirl.

In 2018, he resigned, along with several others, from the Justice League out of frustration with the U.N. sanctions put on the organization by Secretary-General Lex Luthor. Since then, he has assembled and commands a new team, consisting of both former League and Team members as part of a new strategy to combat meta-human trafficking and the the Light.

Tier: 9-B, higher with Explosives Batarangs

Classification: Superhero, Vigilante, Founding member of the Justice League (formerly), Founder and leader of his team

Speed: Supersonic combat and reactions (Is faster than the likes of Robin. Comparable to Deathstroke who can easily keep up with Sportsmaster)

Striking Strength: Wall Class (Stronger than Nightwing and comparable fighters. Harmed Deasthroke and knocked out Mr. Freeze with one punch)

Intelligence: Genius. Batman is a master detective and bases his method on logic. With these skills, he has been able to deduce the identities of the entire Justice League, though not all of the members know this. He owns one of the world's leading technology companies in the world, Wayne Tech, and his company is responsible for much of the Justice League's technology. In addition to English, Batman also can speak a variety of languages.

Weaknesses: Normal human weaknesses but has survived situations that would have killed any normal human being. Can be extremely manipulative and tends to sacrifice everything, including his allies and friends, to accomplish his mission.