VS Battles Wiki
Register
Don't have an account?
Sign In
in: Characters, Cartoon Characters, Male Characters,
and 33 more 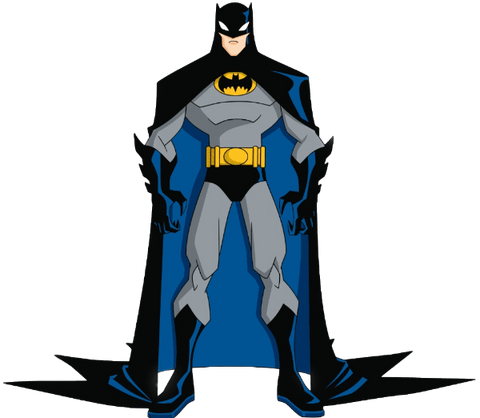 Son of the owners of a massive research and development conglomerate, Bruce Wayne’s parents were killed before his very eyes by a common thug while leaving the theater. He was thusly raised by the family butler Alfred Pennyworth, harboring a deep seated hatred of crime before using his wealth and influence to become the Batman. Physically powerful and agile beyond most, intellectually a master of engineering, software, biology, chemistry, and history, and armed with a variety of weapons and gadgets, he fights crime in his hometown of Gotham City as The Batman.

Age: In his 20s (Relatively young and early into his vigilante career)

Speed: Superhuman running speed (Can keep his pace with police cars) with at least Supersonic reactions and combat speed (Can dodge point blank gunshots, rockets, Firefly's lasers and flamethrowers). Subsonic travel speed with the Batmobile (Travels at 165 mph or 73 m/s)

Lifting Strength: Class 1 to Class 5, possibly higher (Lifted a full oil drum, knocked over a shipping container, struggled and kicked Man-Bat and Killer Croc away, the former being strong enough to tear a bank vault door off the wall and the latter being heavy enough to flatten a car with his sheer weight)

Striking Strength: At least Wall Class, possibly higher (Can crack concrete and break through walls with his strikes)

Durability: At least Wall level, possibly higher (Can survive beatings from superhumans like Clayface and Dracula, which usually consist of him being smashed through walls and falling with enough force to crush a car)

Weaknesses: Not as experienced or as skilled as other incarnations of Batman. Otherwise, none notable.