VS Battles Wiki
Register
Don't have an account?
Sign In
Advertisement
in: Tier 9, Tier 9-B, Tier 4,
and 85 more 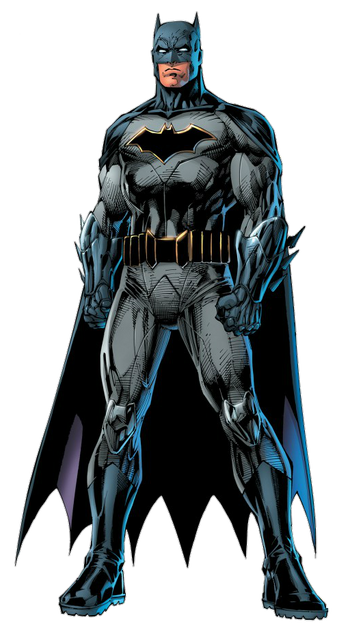 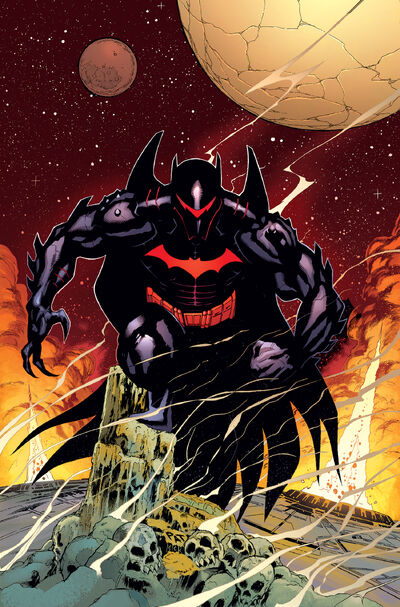 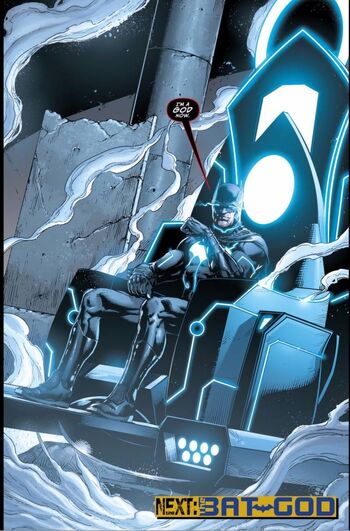 Batman is a fictional superhero appearing in American comic books published by DC Comics. The character was created by artist Bob Kane and writer Bill Fsuinger, and first appeared in Detective Comics #27 (May 1939). Originally named "the Bat-Man", the character is also referred to by such epithets as the "Caped Crusader," the "Dark Knight," and the "World's Greatest Detective".

Superhuman Physical Characteristics, Genius Intelligence (Ozymandias considers him to be the second smartest person on Earth, just behind Lex Luthor), Master Hand-to-Hand Combatant (One of the greatest martial artists in the DC Universe. Defeated 100 people and 4 metahumans, Evenly matched with Deathstroke, defeated a Talon member while starved, sleep-deprived, and weakened, swats Batwoman aside despite being ambushed, can contend with Lady Shiva, and evenly matched with future Tim Drake despite not having any gear or equipment), Pressure Points, (Subdued a drug-enhanced foe with pressure points), Weapon Mastery (Skilled with batarangs, bolas and grappling hooks, explosives, and a variety of melee weapons and firearms), Stealth Mastery (Vanished from Deathstroke's sight in an eye blink, disappears on the Gotham siblings despite their enhanced senses, The JLA, including Superman, Zatanna, Blue Beetle, and Constantine, have trouble finding him, can sneak up on Superman), Hacking (Hacked into an alien computer despite not even knowing its language), Body Control (Can make 10 minutes worth of air last an hour), Social Influencing, Regeneration (Mid-Low; His exposure to Dionesium gave him a healing factor that healed all of his scars and enhanced his speed), Enhanced Senses, (Can fight foes using quantum stealth to make themselves invisible[1] or even while blindfolded[2]. Can identify various types of explosive or wood by the smell[3][4]. Sensed Scarecrow by the smell of fear[5]. Can hear extremely subtle movements of his bats' wings[6]), Extrasensory Perception (Detected the Spectre), Vehicular Mastery (Can drive, sail, and fly with incredible efficiency), and Immense Willpower

Enhanced Senses (His cowl has night vision and optical zoom, as well as x-ray vision), Information Analysis (Can scan biology and in seconds know details of a foe down to the cellular level), Illusion Creation (Uses EMP tech to disguise himself via holograms), Electricity Manipulation (His suit can discharge electricity powerful enough to faze Cyborg, and he can also discharge AOE blasts), Sound Manipulation (Has sound cannons in his chest, which is strong enough to dispel magical constructs), Heat Manipulation (His gauntlet can be superheated), Sleep Manipulation (Possesses tranquilizer darts in his gauntlet), Absorption (Absorbed energy and sent it back as electricity), Attack Reflection (Can send energy attacks right back at opponents with energy rejector systems), Energy Projection (Has lasers that can cut through inches of metal in seconds), Smoke Manipulation (Has smoke grenades in his teeth, and regularly creates smokescreens), Explosion Manipulation (Has explosives strong enough to throw Superman out of a building), Status Effect Inducement (With flashbangs and sleeping gas, all of which are kept in his gauntlet, capes, boots, and his belt), Immense Pain Tolerance (Can fight even after being shot in the stomach), Surface Scaling (Can walk on ceilings with his boots), and Preparation, Non-Physical Interaction (Carries at least one Nth Metal batarang, which can hurt ghosts[7]), Energy Manipulation and Absorption (Nth Metal works by conducting mystical energy[8]. It can absorb energy attacks and be used to strike back with the same power[9]), Vibration Manipulation (Nth Metal can cause shockwaves when clashing with other Nth Metal[10]), limited Physics Manipulation (Structures built of Nth Metal are said to defy the laws of physics[11]), Invulnerability Negation (Nth Metal is one of the only things that can nullify the invulnerability of Dark Multiverse beings[12]), Regeneration Nullification (High-Mid. The Nth metal prevented some alien creatures from regenerating, whereas previously they could grow back from just a detached head.[13] This nullification happens on the cellular level[14]), Limited Power Nullification (Nth Metal caused Morphicius' teleportation to fail, and then he used it to hinder Katar Hol's flight abilities[14]. It also cancelled a century-long spell[15])

Possesses the abilities of Mother Boxes and a Yellow Lantern Power Ring (Possesses a Mother Box and a Yellow Lantern Ring for his contingency against Cyborg and Green Lantern), Absorption (Can siphon speed force energy with a special rod), Information Analysis (The Batcomputer can scan a vast array of different things, and his Haz-Bat suit can analyze opponents), Radiation Manipulation (Built a rod that emits red solar radiation), Time Manipulation (Built a temporal grenade that stopped Flash in his tracks), Power Nullification (Built a ring that disabled Green Lantern Rings and a gadget that disabled Cyborg. His Terminus Armor can emit EMP blasts that disabled tech), Energy Projection (One-shot Bizarro with an energy gun), Statistics Reduction (Reduced Blockbuster's strength to the point Superman effortlessly one-shot him), Status Effect Inducement (Has hardening foam that can stop Frankenstein's Monster), Energy Manipulation (Has a gun that shoots energy cages), Summoning (Can launch an army of drones and has an army of robot Batmen), Light Manipulation (Built watchtowers that emit blinding light), Power Bestowal (Possesses silver kryptonite, which bestows permanent Kryptonian abilities on whoever touches it), Underwater Breathing (Type 2; Has an underwater module for his suit), Limited Self-Sustenance (Type 1; Has a suit that allows him to survive in space), Flight (Has a jetpack module), Limited Immortality (Type 4; Built a machine that grows perfect clones of himself, complete with memories, experiences, training, and intelligence), Teleportation (Can teleport[16] to his batcaves[8]), Minor Physics Manipulation (Can render an area frictionless), Illusion Creation (Has the Veil of Binds, that forces illusions on a target), Forcefield Creation (Has plasma shields that can deflect heat vision), BFR (Built a bullet containing a wormhole that transports objects outside the Source Wall), and Resistance to Magma Manipulation (His magma mech can withstand direct contact with magma)

All standard abilities from before on a far higher level, plus some of the abilities of Green Lantern, Wonder Woman, Flash, Cyborg, and Aquaman's powers, Summoning (Batman can summon the suit), Nanotechnology (The armor itself was composed of a shifting nano kinetic metallic composition which could be shed and re-adorned to his person on command), Flight (Shown here), Status Effect Inducement (Has tendrils that drain the ear of a fluid that helps you balance), Danmaku (Can send hundreds of batarangs at once), Energy Projection (Can fire blasts of energy from his chest), Statistics Amplification (Can greatly enhance his strength with The Devastator), Invisibility (Can turn invisible), Elasticity (The suit is malleable), Absorption (Can absorb energy and matter, even holding Darkseid's Omega Force), Attack Reflection (Absorbed and redirected Darkseid's Omega Energy back at him), Resistance to Heat Manipulation (Was forged in the core of the sun)

Nigh-Omniscience (The only thing he doesn't know is who the Anti-Monitor is), Cosmic Awareness (Was aware of Darkseid's death while in a different universe), Precognition (Can predict the future), Teleportation and BFR (Teleported a car to Antarctica and left them there), Dimensional Travel (Traveled to Earth-3), and Resistance to Antimatter Manipulation (Tanked a direct blast from Anti-Monitor)

Attack Potency: Wall level (Defeated Talon and Fought evenly with Deathstroke), up to Solar System level with preparations (With enough preparation, Batman can go against the Justice League by himself. He has a suit that can take attacks from and punch Wonder Woman back, restrain Aquaman, and take a punch from Superman) | Solar System level (Harmed Darkseid's Post-Flashpoint avatar, which was capable of defeating Superman) | Unknown

Speed: At least Supersonic+, possibly Hypersonic+ (Faster than his Post-Crisis counterpart), up to Massively FTL+ with preparations (Fought with the entire League in his Justice Buster suit, and kept pace with Wonder Woman, Flash, and Superman) | Massively FTL+ (Capable of keeping up with Darkseid, who outpaced Superman, as well as traveling across Apokolips in a relatively short time frame, with the planet itself being gargantuan compared to Earth) | Massively FTL+ (The chair was built by the Anti-Monitor and should be comparable in speed to him)

Striking Strength: Wall Class, Up to Solar System Class with preparations (Punched Wonder Woman hard enough to send her crashing into a wall) | Solar System Class (Incapacitated New Gods like Godfrey and Kalibak, and made Darkseid bleed with a punch) | Unknown

Stamina: Superhuman (At age 24, before Bruce became Batman, he fought for 28 hours without stopping) | Low (Hellbat Armor relies on user's metabolism to power itself) | Likely Unlimited (As the God of Knowledge, Batman likely does not have a stamina limit)

Range: Standard melee range normally, several meters to several dozen meters with Batarangs and gadgets. Far higher with preparation and more advanced Batsuits. Multiversal+ with Mobius Chair (Can teleport to any place in the Multiverse)

Intelligence: Extraordinary Genius. Batman is one of the smartest beings in the DC Universe and is the second smartest human alive, only behind Lex Luthor. Batman is a master of a wide variety of fields of science, ranging from engineering, biology, physics, chemistry, and computer science, as demonstrated when he designed the Hall of Justice, which can transform into a mobile flying fortress, built an absolute zero prison, quickly came up with a serum that protected him and Selina from Poison Ivy's planetary pheromones, shut down a high tech network with a device no more advanced than an ordinary cell phone, reverse-engineered Green Lantern communication and translation, hacked Apokolyptian computers and alien computers using unknown languages, developed a fully sapient Alfred AI, and a machine that grows perfect clones of himself complete with memories, experiences, training, and intelligence. He has built many different Batsuits that are highly versatile, with some of them even capable of singlehandedly fighting off the entire Justice League. Batman has also invented a wide variety of equipment, such as temporal grenades that affect time, a 10'th Metal bullet containing a miniature omniversal wormhole capable of transporting objects outside the Source Wall, and the Son Box, a device capable of reading the hearts of people, as well as building the Final Batsuit around it. Repeatedly creates perfect counters and contingincies which he flawlessly incorporates into his equipment and suits. The World Forger considers Batman one of the greatest strategic minds in existence. Is the greatest Detective and is one of the most skilled martial artists in history, with very few individuals being able to match him in a fight, and despite being powerless and alone, easily outwitted and defeated AMAZO by teleporting him away. | Nigh-Omniscient. With the Mobius Chair, Batman knows everything except who the Anti-Monitor is.

Weaknesses: Normal human weaknesses, refuses to kill unless absolutely necessary and is reluctant to use firearms due to childhood trauma

John Constantine (Post-Flashpoint) (DC Comics) John Constantine's Profile (Base Batman was used, they had two weeks of Preparation, speed was equalized and the battle took place in Clover Kingdom)