VS Battles Wiki
Register
Don't have an account?
Sign In
Advertisement
in: Tier 9, Tier 9-A, Unknown Tier,
and 77 more 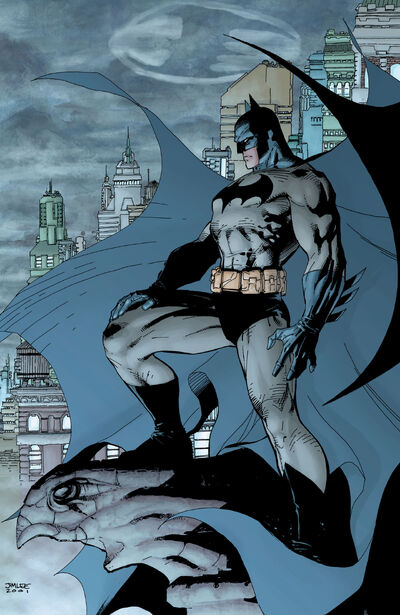 Bruce Wayne was the son of wealthy philanthropists Thomas Wayne and Martha Kane-Wayne and seemed destined for a life of idle decadence and opulence among the elite of the crime-ridden streets of Gotham City.

But his life was irrevocably changed when his parents were murdered by a common thug while walking home. Mentally scarred by the loss, Bruce used his family's wealth to travel the world and acquire the skills, training, and technology he needed to begin his one-man war on the crime of Gotham City.

Adopting the terrifying visage of a bat, Bruce became Batman, a caped vigilante who crusades against the scum and filth of his home city's underworld. After becoming a founding member of the Justice League, Batman quickly became known as one of the most feared individuals in the DC Universe, holding his own against superpowered criminals, monsters, and gods to protect the innocent from those who would do them harm.

Tier: 9-A. Unknown with Explosives, 4-B with Preparation

Genius Intelligence, Superhuman Physical Characteristics, Martial Arts, Stealth Mastery (Regularly disappears on members of the league, even those with senses as powerful as Superman. Can disappear even when people are looking at him. Can disguise himself as people of different ethnicities or age ranges, regularly bypasses Oracle’s security, which uses air pressure change detection and state of the art systems. Superman can't see his actions), Weapon Mastery (Has mastered all weapons. Can easily hit foes at multiple angles and directions in a single throw), Hacking (Easily hacked into Lexcorp and Darkseid’s Hellspores), Extrasensory Perception (Can sense Chi. Can sense the presence of Deadman, who is a invisible spirit), Clairvoyance (Can see the past, present, and future in his dreams), Limited Information Analysis (Is a master detective, Can visualize entire sequences of events and plots in his head and analyze them in the middle of combat. Easily figured out what was really causing disturbances across Earth, and saw through the methods Wonder Woman used to fight the Flash), Instinctive Reaction and Precognition (Has a sixth sense that allows him to instinctively dodge attacks without knowing about them, warns him of danger, and allows him to easily anticipate the attacks of multiple foes. Can predict someone’s movement based on speed and momentum), Mind Manipulation (Can hypnotize people), Body Control and Pressure Points (has methods that allow for self-induced comas and nerve attacks, can loosen muscles, slow blood flow, and control his adrenaline), Power Nullification (Knows a spell which negates magic for a hour), Sealing (Knows magic that allows him to seal someone in a crystal), Self-Perception Manipulation (Can manipulate his own perception of time), Enhanced Senses (Disarmed a foe on a shot described by Deathstroke as impossible. Smelled a fire in Gotham while he was underground outside the city. Smells well enough to identify chemicals. Can literally smell emotion. Described as having superior vision to Eagles, and easily saw Robin spy on him. Hears a dying man’s speech while at the top of a building and a alarm from three blocks away), Vehicular Mastery, Magic, Preparation

Sleep Manipulation (Was not affected by sleep inducement), Pain Manipulation (Claims pain only motivates him. Overcame two years of torture at the hands of Desaad, who inflicted on him the pain of this he had tortured before him), Fire Manipulation (Unhindered by fire. Survived Etrigan’s hellfire. His suit has internal cooling systems), Poison Manipulation (Is immune to most forms of poison. Survived direct injections of Crystal Meth and Heroin), Fear Manipulation (Has gained a immunity to fear toxin. Phobos, the God of Fear, couldn’t put fear in him), Electricity Manipulation (Was only slightly dazed by 10,000 volts of electricity. Can insulate his suit from the power of Gotham’s grid, and can safely run 200,000 volts through his suit), Acid Manipulation (Tanked acid using his cape), Ice Manipulation (Unharmed by Mr. Freeze’s ice, Radiation Manipulation (His suit is insulated from radiation), Body Puppetry and Biological Manipulation (Somewhat resists the powers of a meta human that controls flesh), Perception Manipulation (Able to act relatively well while affected by hallucinations, even escaping bondage. Broke through a illusion with sheer force of will), Empathic Manipulation (Unharmed by Ivy’s pheromones. Has will comparable to a Green Lantern), Absorption (Somewhat resists assimilation from Tharok), Illusion Creation: (Saw through Circe’s Illusion), Mind Manipulation (Has a backup mind. Overpowered a powerful mental entity. Broke free of a mental cage. When attempting to break into Batman’s mind, the Synaptic Kid was entrapped within and eventually believed himself to be Bruce Wayne, and fell into a coma), Sound Manipulation (Via Sonic Dampners), Electromagnetic Pulses (Unaffected by his own EMPs), Possession: (Yurrd couldn’t possess him), Telepathy (His mind can’t be read), Soul Manipulation and Deconstruction (Broke through this)

Attack Potency: Small Building level+ by himself (Can trade blows with those capable of harming him and his suit), Unknown with Explosives (Though they are treated as being far above himself, their power is wildly inconsistent), Solar System level with Preparation (Can create armors and robots equal or superior to Superman and other members of the Justice League)

Speed: At least Supersonic+ (Comparable to Nightwing. Casually caught a cricket ball while weakened), possibly Hypersonic+ (Outclassed a young Cassandra Cain[1], who had not yet trained to become Batgirl, but was implied to have done this as a child)

Lifting Strength: At least Class 1 (Can easily bench-press 1,000 lbs as part of his daily workout routine), possibly Class 5 (Has stated to be able to press 2,500 lbs with his legs. Can easily rip chains apart. Has repeatedly lifted off massive amounts of rubble off of him, and can pull massive steel beams with his grapnel gun. Pushed back a gigantic boulder and a marble statue. Stopped a gigantic metal penny from rolling. Pulled gigantic crates filled with explosives. Held up a massive portion of a collapsing building all by himself. Held up a large portion of a roof with his bare hands)

Striking Strength: Small Building Class+ (Has broken down steel doors in a few kicks and snapped a tree in half in a single kick, stronger than Deadshot. Should scale to his own durability), Solar System Class with Preparation (Can create robots and armors with strength comparable to Wonder Woman and other league members)

Durability: Small Building level+ (Has survived multiple large explosions), Solar System level with Preparation (Can create armors and robots that can fight with foes of the Justice League)

Stamina: Very high (Can fight even while heavily injured, unbroken by two years of torture from Desaad)

Range: Standard melee range. Tens to Dozens of Meters with his various devices.

Intelligence: Extraordinary Genius. The officially second most intelligent person on the planet after Lex Luthor. Proven to know at least 127 different martial arts styles, and has merged them together in order to create new styles. He is also considered one of the greatest martial artists in existence and claims that he has read every book in the world in order to prepare for any eventuality.

Weaknesses: Normal human weaknesses but has survived situations which would kill an average human, refuses to kill.

Shinobu Oshino (Monogatari) Shinobu's Profile (Both had standard equipment, speed was equalized, Shinobu was in her Quasi-Vampire key)

Gumball Watterson (The Amazing World of Gumball) Gumball's Profile (Speed was equalized and both were fully equipped. Gumball was bloodlusted and had a week of prep, while Batman only had 5 minutes)

The Avengers (Marvel Cinematic Universe) The Avengers' Profile (Endgame Avengers used. Speed equalized, in-character, both sides had prior knowledge and Avengers have 30 minutes of prep to stratergize. Battle set in San Francisco with either side not knowing the others’ location.)