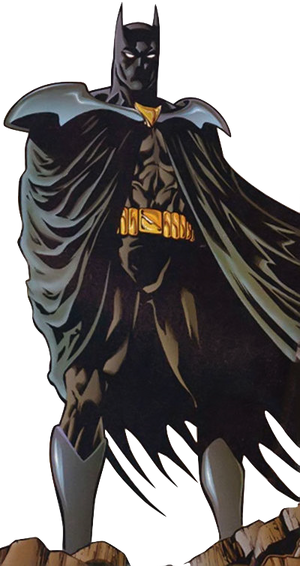 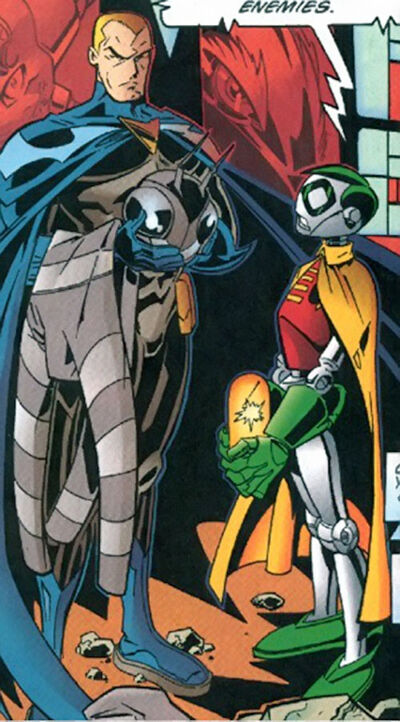 In 853rd century, it was on the prison planet of Pluto that the seeds would be sowed for this Batman. The planet was home to tens of thousands of the worst criminals from across the galaxy, kept under strict control. However, one day, a virus-infected members of the prison guard, driving them utterly insane. In their madness, they released the prisoners. The worst scum of the galaxy routed the remaining guards in hours and took control. They dragged guards and their families to exercise area. It was there that the sadistic prisoners made fifteen thousand children watch as their parents were gunned down over a period of days. The resulting trauma drove hundreds to commit suicide with hundreds more driven mad from the experience. But one child did not succumb. Instead, he took a vow to never allow such an atrocity to occur again. He vowed to become the Batman.

Batman is a member of the Justice Legion Alpha and the warden of the dangerous Asylum Planet of Pluto. He patrols the entire planet himself, aided only by his sidekick Robin, the Toy Wonder.

Age: Unknown but appears to be fully grown adult

Attack Potency: Small Building level+ (Stated that his body and physical prowess is just as good as the original Batman's. Capable of knocking Batman unconscious.) Ignores durability to an extent with telepathic martial arts and data-rangs phase through solid matter

Speed: Massively Hypersonic combat speed (Comparable to the 21st century Batman and capable of keeping up with Nightwing)

Stamina: Very high (Maintains and handles the issues of a planet-sized asylum full of thousands of criminals with only his sidekick for aid day to day)

Intelligence: At least Extraordinary Genius. Stated to have an IQ of 1045 and wields highly sophisticated technology far in advance of anything in the 21st century. As a human of the 853rd century, he is capable of processing vast amounts of information that can easily overwhelm even Superman. Figured out how to escape a time loop.

Retrieved from "https://vsbattles.fandom.com/wiki/Batman_(One_Million)?oldid=6506713"
Community content is available under CC-BY-SA unless otherwise noted.