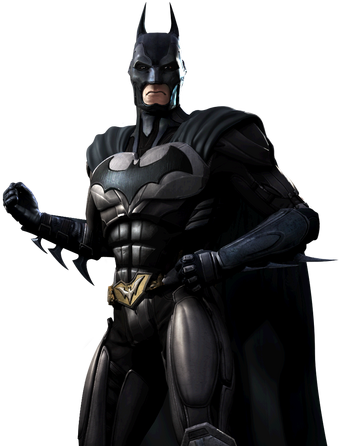 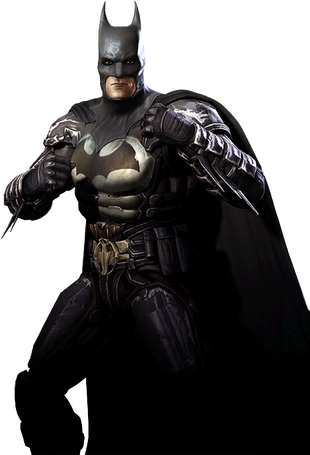 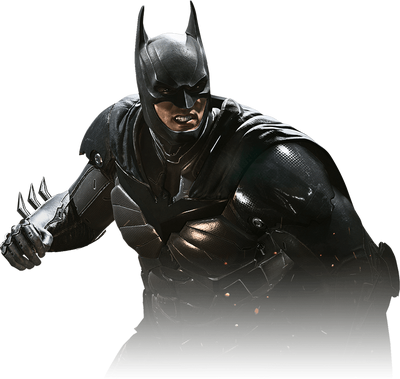 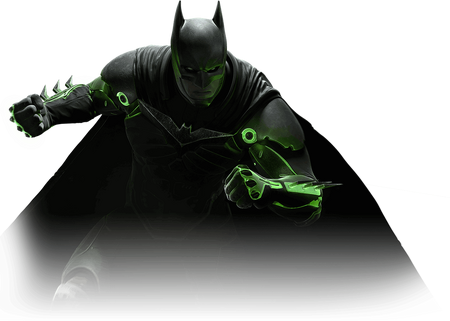 Batman is a playable character and the main protagonist in Injustice: Gods Among Us and Injustice 2. He is classified as a Gadget User. His Batcave and Mansion are featured as Stages within the game.

Bruce Wayne was born in Gotham City, an only child to Dr. Thomas and Martha Wayne, and the latest descendant in the city's generationally prominent and wealthy Wayne family. One night, after seeing a rousing adventure film, the Wayne family exited the theater through an alleyway and was confronted by a street mugger. When Thomas tried to stop the mugger from stealing his wife's pearl necklace, he shot both Thomas and his wife right in front of 8-year old Bruce's eyes. Running away in fear of what he had done, the mugger was never brought to justice. After traveling the world, honing his skills and toning his body to absolute human perfection, he embodied his childhood fear and a premonition he saw at his window. He became the Batman.

When the wife of his best friend Superman was pregnant with a child, he was asked by him to be the godfather. After the Joker drugged Superman, causing him to murder his wife and child, he murdered the Joker right in front of Batman. True to his code, Batman fought against his tyrannical and murderous ways, forming the Insurgency to bring Superman's Regime to an end.

Tier: Unknown by himself, Low 6-B via Kryptonian Pills and Powered Armor

Attack Potency: Unknown by himself (One of the best fighters in the Injustice series. Superior to Damian Wayne and Dick Grayson and is on par with Red Hood and Ra's Al Ghul. Defeated Deathstroke. Overpowered and defeated Aquaman and Black Adam without being enhanced), Small Country level via Kryptonian Pills and Powered Armor (Defeated Wonder Woman and Superman)

Speed: Unknown, at least Superhuman, Massively FTL+ Combat Reactions and Reflexes (Can react to punches and attacks from superpowered beings like Aquaman and Wonder Woman)

Lifting Strength: Unknown by himself, Class G via Kryptonian Pills and Powered Armor

Striking Strength: Unknown by himself (Can easily harm the likes of Robin and superpowered beings like Aquaman or Wonder Woman while not enhanced), Small Country Class via Kryptonian Pills and Powered Armor (Defeated Superman)

Intelligence: Extraordinary Genius. Batman is a master of strategy and an incredibly skilled fighter who mastered almost every martial arts style known, and trained his mind to solve any problem. He possesses extremely vast knowledge in science, technology, combat tactics and is not above fighting dirty and tricking his enemies to counter them. In addition to his numerous skills, his most powerful weapons are his absolute determination and his dedication to defeat his enemies, even if it would cause his death. He has outwitted beings far above humanity consistently and has defeated Superman twice. Was the absolute driving force behind the Insurgency's victory against the regime, at the same time creating a device that can transport people across the multiverse.

Weaknesses: Normal human weakness but has survived situations that would have killed any other human being. Has shown emotional weakness in Injustice 1, however, the majority of this is mitigated by Injustice 2.