Bruce Wayne is the billionaire owner of Wayne Enterprises, and a costumed and armored vigilante operating in Gotham City known as Batman.

After witnessing the murder of his parents at the hands of a mugger as a child, Bruce ultimately became the fearsome vigilante Batman as an adult, beginning his crime fighting career over a decade before the alien invasion of General Zod. Through those years, he became heavily seasoned as an expert crime fighter and detective, having fought and overpowered numerous criminal adversaries, most notably the extreme psychopath Joker. He also mentored his ward and partner vigilante Jason Todd (known as "Robin"), though the latter was eventually killed by the Joker.

Two years after witnessing the Black Zero Event, Batman grew increasingly wary of the alien hero Superman, and the two would initially fiercely battle one another (mainly due to manipulation). However, they would ultimately settle their differences and team up with Wonder Woman, together managing to take down Lex Luthor's unleashed bloodthirsty monster, Doomsday. With Superman seemingly killed by the dying monster, Batman and Wonder Woman would be inspired by his noble sacrifice to begin establishing the valiant Justice League, in order to battle any future threats to the world.

Attack Potency: Wall level (Capable of punching a man hard enough for them to flip in the air and smash into a wooden floor, and throwing someone with enough force to break a wall among other feats. Can also smash his way through a wall, and do battle with Parademons. His suit enhances his ordinary strength due to having brass knuckles in his gauntlets) | Small Building level+ (Was completely overpowered by Superman, and required Kryptonite to defeat him. However he was able to send weakened Superman flying with a kick and swung him like a wrecking ball with the use of a rope, destroying four large pillars), up to Small City level with Prep Time (Capable of crafting 300 Decibel Soundwave emitters)

Speed: Subsonic (Fast enough to completely outclass and take down dozens of armed men before they can even react, doing many complex maneuvers in seconds. Also dodged blasts from a Parademon's Plasma Carbine from close range). He has reacted to Doomsday's attacks, but this appears to be a Plot Induced Stupidity Outlier.

Striking Strength: Wall Class (One punch of his holds 6.3 kN or 1420 pounds-force, the equivalent to getting hit by a battering ram) | Small Building Class+ (Made Kryptonite-infused Superman bleed with his strikes. Even at his weakest Superman could survive being thrown through giant concrete pillars while shattering them upon impact, as well as various other powerful blows)

Durability: Wall level, higher with his suit (It's a highly durable and flexible Kevlar-titanium alloy, highly resistant to knives and bullets several of which it tanked at point blank, also proved immune to Firefly's Flamethrower in a Prequel Comic, and tanked the explosion of KGBeast's Flamethrower tank at point blank. Batman also survived being tossed by Superman into a police car with enough force to flatten the vehicle) | Small Building level+ (Survived getting thrown through buildings numerous times by an extremely held back Superman)

Intelligence: Genius. Extremely competent fighter with decades of experience as a Vigilante. Very Skilled Detective. Alongside Alfred, constructed many highly advanced gadgets and pieces of tech.

Weaknesses: Any weakness of a regular human, but has survived situations which would kill a normal human. Has a questionable mental state, suffering from paranoia and extreme anger, which led to him being easily manipulated by Lex Luthor. However, after Superman's sacrifice, Bruce regained his optimism and sense of hope, and is no longer mad.

"There was a time above... A time before... There were perfect things... Diamond absolutes. But things fall... The things on earth. And what falls... Is fallen." 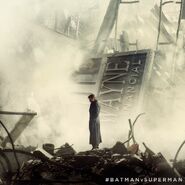 "Metropolis. Mankind is introduced to The Superman."

"Oh, yes it has, sir. Everything's changed. Men fall from the sky, the gods hurl thunderbolts, innocents die. That's how it starts, sir. The fever, the rage, the feeling of powerlessness that turns good men... Cruel."

"Twenty years in Gotham, Alfred; we've seen what promises are worth. How many good guys are left? How many stayed that way?"

"You don't know me, but I've known a few women like you."

"That son of a b---- brought the war to us two years ago. Jesus, Alfred, count the dead... Thousands of people. What's next? Millions? He has the power to wipe out the entire human race, and if we believe there's even a one percent chance that he is our enemy we have to take it as an absolute certainty... And we have to destroy him."

"I'm older now than my father ever was. This may be the only thing I do that matters." - A broken Bruce, determined to kill Superman. 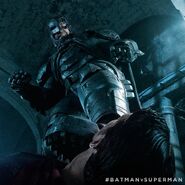 "I bet your parents taught you that you mean something, that you're here for a reason. My parents taught me a different lesson, dying in the gutter for no reason at all... They taught me the world only makes sense if you force it to."

I've failed him... in life. I won't fail him in death..." - Superman' sacrifice brought goodness to Batman once again.
Add a photo to this gallery