VS Battles Wiki
Register
Don't have an account?
Sign In
Advertisement
in: Characters, Batman (1966), Male Characters,
and 30 more 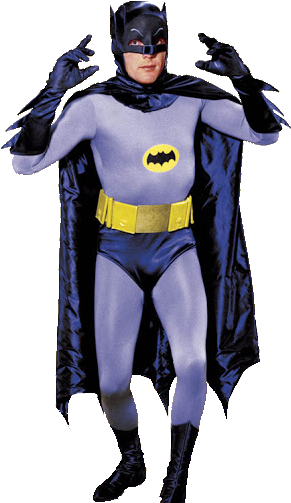 Batman aka Bruce Wayne, famously played by Adam West, is the main protagonist of the 1966 TV show Batman.

Tier: 9-B physically, at least 9-B with equipment

Attack Potency: Wall level physically (Can fight thugs with super strength who destroy a table and bend a metal rod, fought a tiger), at least Wall level with equipment (Normal bombs are this level, can damage a tank with the Bat-Zooka, etc)

Speed: At least Superhuman movement speeds (Can run a mile under 2 minutes) with Subsonic reactions (Can dodge close range gunfire)

Lifting Strength: Superhuman (Can fight against foes who can bend metal bars with ease)

Durability: Wall level (Was visibly unharmed by an attacking bull shark, can take hits from those who he can harm), higher with equipment (Bat-Shield can block bullets from machine guns and shotguns)

Weaknesses: Can be easily caught off guard, often goes into traps without precaution, can be tricked or seduced by females

Note: This doesn't include the cartoon films or comic book adaptations