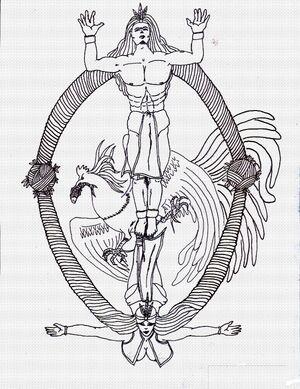 According to the indigenous religious beliefs of the Tagalog people, Bathala (sometimes spelled Batala), is the all-mighty deity who created creation itself and the Heavens and the Earth. A descriptive appellation is often attached to its name. He is described as the Bathalang Maylicha (Bathala the Creator; lit. "Actor of Creation") and as the Bathalang Maycapal (Bathala the Almighty; lit. "Actor of Power").

Bathala is compassionate with deep appreciation and is pleased with those obedient to his commandment. Although he may be compassionate, he is extremely unforgiving in his punishment for those who sin against him. For this punishment, Bathala strikes lightning and thunder to the Earth to strike transgressors.

Age: As Old as Creation

Classification: Deity, The Supreme Being and Creator of the Universe, Eternity, Filipino God,

Attack Potency: Universe level+ (According to the indigenous religious beliefs of the Tagalog people, it is believed that Bathala created the Universe itself including the Heavens and the Earth and came from Eternity but isn't created by anyone or anything)

Speed: Unknown, possibly Omnipresent (He created all of Creation, therefore exists within all of creation itself)

Retrieved from "https://vsbattles.fandom.com/wiki/Bathala_(Mythology)?oldid=5384503"
Community content is available under CC-BY-SA unless otherwise noted.