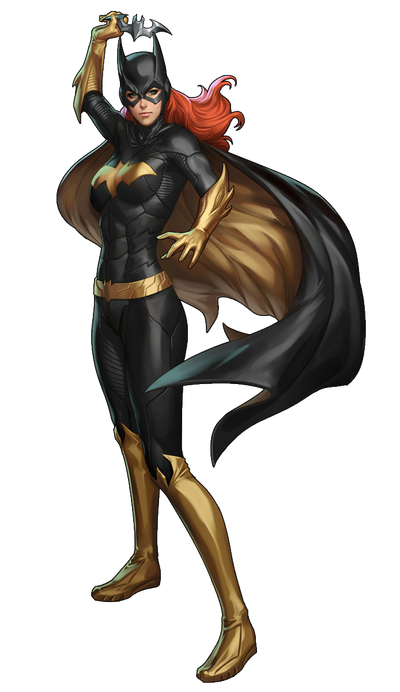 Barbara "Barb" Gordon is a fictional character appearing in comic books published by DC Comics and in related media, created by Gardner Fox and Carmine Infantino. From 1967 to 1988, she was the superheroine Batgirl; from 1989 to November 2011, she had been known as Oracle. In Batgirl Vol 4 #1, she recovered from her injuries and hit the streets as Batgirl once again. Introduced as the daughter of Gotham City police commissioner James Gordon, Barbara Gordon made her first comic book appearance in a story published in Detective Comics #359 titled "The Million Dollar Debut of Batgirl" (January 1967).

As Batgirl, Barbara Gordon has been described as one of the most popular characters to appear during the Silver Age of Comic Books and is also regarded as a pop culture icon due to her appearances in the Batman television series of the late 1960s and continued media exposure. The Barbara Gordon version of Batgirl has been adapted into various media relating to the Batman franchise, including merchandise, television, and animation. During the early 1970s, the character was also used as an advocate for women's rights.

Following the editorial retirement of the character's Batgirl persona in 1988, Alan Moore's graphic novel Batman: The Killing Joke depicts the Joker shooting Gordon through the spinal cord in her civilian identity and leaving her a paraplegic. Although Gordon would no longer resume her role as Batgirl in subsequent stories, editor Kim Yale and writer John Ostrander soon established the character as a computer expert and information broker code-named Oracle, providing intelligence and computer hacking services to assist other superheroes. The character first appeared as Oracle in Suicide Squad #23 (January 1989).

Age: Unknown, likely in her late teens or early 20's

Speed: Massively Hypersonic (Should not be overwhelmingly slower than Katana, evaded gunfire on multiple occasions)

Intelligence: High, Barbara is shown to have naturally high intelligence.