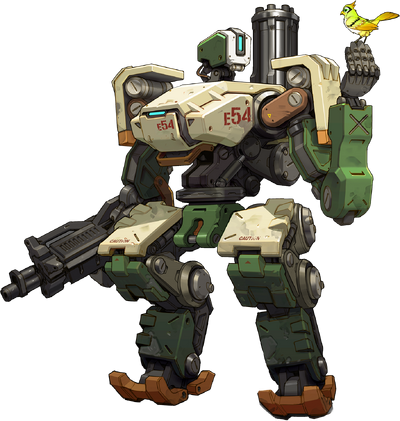 Once a frontline combatant in the devastating Omnic Crisis, this curious Bastion unit now explores the world, fascinated by nature but wary of fearful humanity.

Originally created for peacekeeping purposes, Bastion robot units possessed the unique ability to rapidly reconfigure themselves into an assault-cannon mode. But during the Omnic Crisis, they were turned against their human makers, forming the bulk of the omnics' rebel army. Following the resolution of the crisis, nearly all of them were destroyed or disassembled. To this day, Bastion units still symbolize the horrors of the conflict.

One unique Bastion unit, severely damaged in the final battles of the war, was left forgotten for over a decade. It lay dormant, exposed to the elements and rusting while nature slowly reclaimed it. Overgrown with vines and roots and nested upon by small animals, the robot sat inert, seemingly unaware of the passing of time. That was until one fateful day when it unexpectedly reactivated. With its combat programming all but lost, it instead displayed an intense curiosity about the natural world and its inhabitants. This inquisitive Bastion unit set out to explore its surroundings and discover its purpose on a war-ravaged planet.

Though "Bastion" appears to be gentle—even harmless, at times—its core combat programming takes over when the unit senses danger, utilizing its entire arsenal to eliminate anything it perceives as a threat. This has led to instances of conflict with the few humans it has encountered and has driven it to avoid populated areas in favor of the wild, uncharted regions of the world.

Powers and Abilities: Superhuman Physical Characteristics, Information Analysis (Able to analyze the topography of his surroundings up to a range of several kilometers), Technology Manipulation (Able to interface with other Bastion units and access their memory banks), Weapon Mastery (Skilled marksman), Transformation (Can transform its Recon, Sentry, and Tank forms at will), Damage Reduction (Passively reduces incoming damage when in his Sentry and Tank forms), Healing (Can repair itself mid-combat), Explosion Manipulation (Via Configuration: Tank)

Attack Potency: Small Building level (As a combat-model Omnic, Bastion should be stronger than most humans and somewhat comparable to Winston. While weak, its rounds are still more than capable of downing other heroes like Junkrat, who can easily survive being at the center of an explosion that leveled a warehouse) | At least Small Building level (Its Minigun and Cannon can quickly shred apart the armor of the most resilient heroes in the game such as Reinhardt, His bullets are able to cut through trees effortlessly as shown in his Cinematic.) | At least Small Building level (Its tank shells can easily down most other heroes on impact)

Stamina: Extremely High, possibly Unlimited (was in various states of activity for decades without needing to recharge or rest)

Intelligence: Bastion has a very child-like mentality and is relatively peaceful and curious about its surroundings. However, upon entering combat it is believed to become a single-minded killing machine, shooting down anything that may be perceived as a threat with maximum efficiency before reverting to normal. Despite this, Bastion has shown to be able to retain a great deal of its normal personality while in combat during gameplay, being able to work alongside its human allies without issue and managing to communicate somewhat with the various beeping and booping noises it makes (such as to say thanks), even blaring the charge bugle upon entering Tank Mode.

Weaknesses: Bastion suffers from severe PTSD from the Omnic Crisis, which can reawaken its original programming and turn it into a mindless killing machine. Repairing itself prevents it from using its weapons. Configuration: Sentry is completely immobile. Configuration: Tank can only be used for a few seconds.