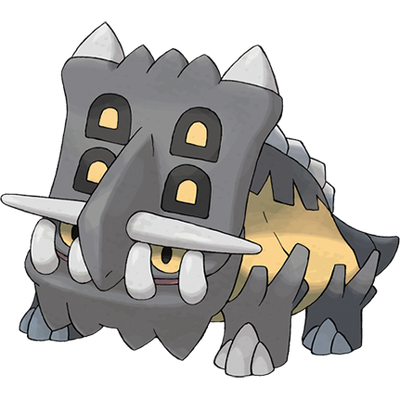 Bastiodon is a ceratopsian Fossil Pokémon that debuted in Pokémon Diamond and Pearl. Although it is normally docile and feeds on leaves and berries, it will not hesitate to fight its foes to the death when defending its young, repelling attacks with its shield-shaped head.

Age: Varies, but have lived 100 Million years ago.

Attack Potency: At least Mountain level+ (Can hurt other members of its species)

Durability: At least Mountain level+ (Can take hits from Rampardos with ease)

Stamina: High (Rock type Pokémon are extremely durable even for Pokémon standards. Even more thanks to its steel typing)

Intelligence: Pokémon are naturally good at combat. Animal-like in other areas

Weaknesses: Bastiodon is extremely vulnerable to Fighting and Ground-type attacks and also takes additional damage from Water-type attacks. Bastiodon is also noted to be less durable when attacked from behind in its Pokedex entries