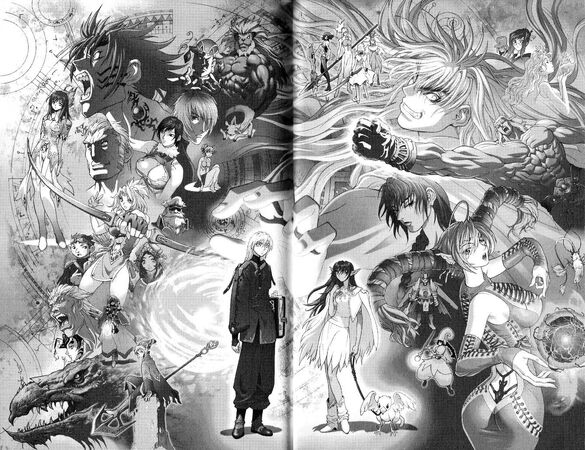 Bastard!! is a long-running cult manga written by Kazushi Hagiwara that began in 1988 and is currently ongoing with 26 completed volumes. Volume 27 is currently in the process of being published. The series was inspired by Hagiwara's love of Heavy Metal music and fantasy tropes (Dungeons & Dragons is considered an influence, but Hagiwara supposedly never mentions it in any interviews).

The story focuses on the exploits of Dark Schneider, the most powerful wizard in the Bastard!! world. He takes on fellow magician warlords that used to be his top generals (eventually winning them back to his banner), the "god" of destruction Anthrax, and eventually the highest angels and demons. While this is going on, Dark Schneider's real goal is only to defeat his enemies so he can take over the world for himself and have a worldwide harem. Whether he'll be successful is yet to be seen.

Bastard!! is one of the more powerful manga series out there. All major characters are on Tier 7 even at the beginning of the series, with its later volumes being littered with many Tier 4 characters. The manga has confirmed instances of characters shattering dimensions and black holes, as well as Galaxy busters and beyond. All of this is combined with broken techniques, defense, and regeneration, as well as MFTL speeds (both travel and combat).

The series is still ongoing, though currently on hiatus, so its power is likely to increase.

The power of the OVA universe is different by a large amount. It is vastly weaker. Its best feat is City level but doesn't even scale to Dark Schneider who is only Small Town level.