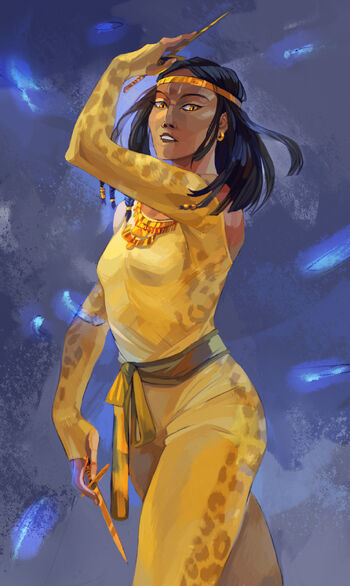 Bast (also spelled Bastet and Ubasti) is the Egyptian goddess of felines. During the reign of Ra, Bast served as his second eye. Her host was Sadie's cat, Muffin.

When Ra found Sekhmet to be too unruly to be his champion, he replaced her with Bast. As Ra was forced to withdraw into the heavens, he bound Bast and Apophis together and sent them to the Duat so that she would eternally fight him, keeping Apophis from rising. Although Bast was proud to have this duty, she eventually began to realize that Ra had intended for them to kill one another repeatedly, thus weakening each other's essences, until they "ripped each other into nothingness," allowing the world to finally be safe. Bast was eventually freed by Ruby and Julius Kane.

Powers and Abilities: Superhuman Physical Characteristics, Immortality (Types 1 and 3), Regeneration (Low-Godly, like any other god she can reform herself in the duat if she is killed), Animal Manipulation, Can create a combat avatar, Duat Travel, Healing, Can banish other gods back into the Duat, Connection to Apophis, Magic

Speed: At least High Hypersonic+ (Far superior than any magician when serious)

Stamina: Godly (As a goddess, she rarely suffers from physical exhaustion and will never succumb to the effects of illness or aging. Fought Apophis for millennia in never-ending combat.)

Intelligence: Immortal being with thousands of years worth of knowledge and combat experience

Weaknesses: Can be banished deep into the Duat through death or very powerful and effective magical items, Needs a host to appear in the mortal world for any significant length of time, Can be destroyed if a magician casts an execration spell on their sheut. Because she choosed a cat as host, her stamina and power is limited outside of the Duat.

Note: Please do not add her as 5-B or create an "Eye of Ra" key. This has been discussed and decided against.