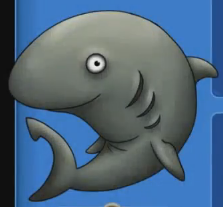 Name: No name given

Powers and Abilities: Superhuman Physical Characteristics, Can eat virtually any form of matter and grows larger the more it eats, Small Size (Varies from Types 2 to 0) and Large Size (Types 0 and 1)

Attack Potency: Varies from Below Average level (Able to eat fish fry despite being a 5-millimeter-long filter-feeding shark) to Large Building level (Can eat destroyer ships and ate a 70-meter-long fat submarine at the end)

Speed: Varies from Below Average Human to much higher

Lifting Strength: Below Average Human (Able to grab and eat termites) to Class M (Approximated from a 2050-ton displacement of a Fletcher-class destroyer)

Durability: Varies from Below Average level to Large Building level (can take torpedos from a submarine; its size alone also should warrant this)

Range: Millimeters to tens of meters

Weaknesses: Touching anything bigger than him (that tries to attack him) makes him shrink by a slight amount.