Basil Hawkins is an infamous pirate known as the "Magician" and the captain of the Hawkins Pirates. He came from the Grand Line and is one of twelve pirates who are referred to as the "Worst Generation" (Formerly known as the "Eleven Supernovas"). His previous known bounty amounted to 249,000,000, but after the time skip it was raised to 320,000,000.

Powers and Abilities: Superhuman Physical Characteristics, Expert Swordsman, Fortune Teller and limited Fate Manipulation (With Cards, also capable of manipulating the actions of others), Straw Manipulation, Weapon Creation (Can create nails to use as weapons), Breath Attack (His Straw Man spit out nails as a form of an attack), Life Manipulation (He places life essences into his dolls), Attack Reflection (Can transfer damage from himself to other people via Voodoo Dolls), Rudimentary Observation Haki user, Transformation (via Goma no So), Summoning (can summon a Straw Man from his sword), Possibly Statistics Amplification (His cards can grant unimaginable powers)

Attack Potency: Varies (His manipulation of fate dictates how strong or weak he's against an opponent), likely Mountain level (Kept up with Trafalgar Law, being able to casually stop his sword blows. Harmed Zoro with one of his attacks)

Speed: At least Massively Hypersonic+ (Kept up with Law and Zoro. Reacted to a kick from Kizaru)

Lifting Strength: At least Class G (Stopped a lizard thrown by Luffy with his sword)

Durability: Unknown, likely Mountain level (His ability to transfer damage makes it hard to hurt him)

Weaknesses: Standard Devil Fruit users weaknesses. Voodoo doll supply is limited to ten dolls. Any damage done to the Straw Man figure from the sword is transferred to Hawkins himself.

Cards: Hawkins has the ability to draw cards, affecting the outcome of an event or fight. These cards increase in risk or success depending on what Hawkins drew before. If he makes a bad draw, his next card will be successful on his part.

Ware-Ware no mi (Straw-Straw Fruit): Basil Hawkins has the ability to manipulate and generate straws from his body. He can create straw dolls to fight for him, seemingly create dolls that are linked to individuals that can divert damage inflicted onto him towards those selected individuals. 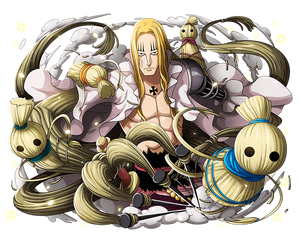 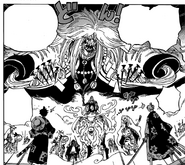 Note: This profile covers only the feats done until the Wano arc, skipping the Pre-Timeskip events due to the lack of feats Hawkins had at the time.