VS Battles Wiki
Register
Don't have an account?
Sign In
Advertisement
in: Characters, Wizard101, Magic Users,
and 96 more 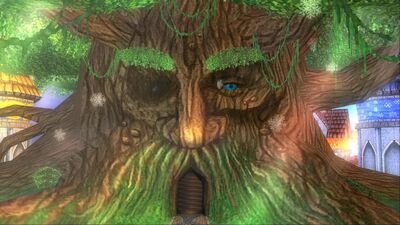 Bartleby is one of the three cosmic beings in the Wizard101 universe. Bartleby existed as the center of magic in the First World and watched over existence. His sister, Grandmother Raven decided to give Bartleby the Eyes Of Time, one showed the past, and the other showed the future.  This would make Bartleby's job of watching over the First World much easier. One day, he sang a song, which would be known as the Song Of Creation, which would multiply his sister's and Spider's children, the Three Titans, into a race of lesser beings, who became the inhabitants of the First World. However, the Titans would one day get into conflict. Seeing that this battle would go on for an eternity, Bartleby sang the Titanic Lullaby, which would put the Titans into an eternal sleep. With the First World now broken into fragments due to the conflict, Bartleby was forced to sing the Song Of Creation once again, to fashion a spiral to hold the fragments of the First World together. He now serves as the center of magic in the Spiral. It was later revealed that Bartleby is the mortar that binds the concepts of Darkness and Chaos with Light and Order, and guards the life-giving water across the Spiral.

Classification: The Divine Paradox, The Source of Magic, The Great Tree, The Grandfather Tree

Powers and Abilities: Superhuman Physical Characteristics, Self-Sustenance (Type 1), Higher-Dimensional Existence (Exists at a level far beyond mortal comprehension, and beyond the past and future, and even existence), Magic (Exists as the source of magic in the Spiral), Enhanced Senses (Can detect magic and magical auras), Information Analysis, Abstract Existence (Type 1. Grandmother Raven is the manifestation of Light and Order, while Grandfather Spider is the manifestation of Darkness and Chaos. Bartleby is the mortar which binds the opposing forces together. The trees of Ravenwood which make up an aspect of existence are just offshoots/aspects of Bartleby himself), Immortality (Types 1, 3 and 9; his true divine body exists independently from his physical form), Death Manipulation, Curse Manipulation, Life Manipulation, Transduality (Type 2; Bartleby binds all the dualities of existence together, however, Bartleby himself doesn't have an duality to define him, making him a paradox in the great heirachy of existence), Necromancy, Durability Negation, Willpower Manipulation (With Death Magic, users can strengthen their own will), Empathic Manipulation (Can calm targets, making them less aggressive towards him, or enrage them, making them more aggressive towards him), Pain Manipulation (Can create words which hurt to speak, hear and even read), Fear Manipulation (Death Magic allows users to channel their own fears out of their body and unleash it on their enemies), Life Force Absorption, Causality Manipulation, Telekinesis, Telepathy, Poison Manipulation, Teleportation, Weather Manipulation, Ice Manipulation, Earth Manipulation, Sleep Manipulation (Put the Titans into an eternal sleep. The song also managed to work on Grandfather Spider and can work on sleepless beings), Regeneration Negation (High-Godly; Should scale to Raven, who can kill the Player despite his ability to regenerate after the destruction of its body and soul, and being conceptually devoured from existence. Can also kill Grandmother Raven and Grandfather Spider), Sealing (Bartleby's sealing spell is the same as Grandmother Raven's), BFR (Can entrap foes into an "eternity of nothingness" and "A Place That Is Not A Place"), Pocket Reality Manipulation (Scaling from Grandfather Spider), Transmutation (Balance Magic blends the forces of all the other schools together), Astral Projection, Fire Manipulation, Regeneration (High-Godly; The Divine Paradox is the essence of Bartley. With this essence, The Player was able to regenerate from Conceptual devourment from existence ), Statistics Amplification (Can buff his attacking and healing spells), Statistics Reduction (Can weaken healing, accuracy and damage output by 100% individually), Damage Boost, Damage Reduction, Reality Warping, Technology Manipulation, Corruption (Type 2), Power Mimicry (Shadow Magic can make warped reflections of what is or what was), Dream Manipulation (Shadow Magic can turn dreams into nightmares), Soul Manipulation, Matter Manipulation (Created Ravenwood and the Spiral as a whole alongside Grandmother Raven. Can use Shadow Magic to tear matter apart and put it back together), Power Nullification (Nullifies all forms of magic and non-magic spells/techniques that are associated with the 7 Schools of Magic, Shadow Magic, Astral Magic, physical damage and healing), Duplication (Multiplied the Titans into an entire race of lesser beings), Conceptual Manipulation (Type 2; Stated he could destroy the living concept of Light and Order if it ever came down to it, and should be able to do the same of the living concept of Darkness and Chaos. Binds all 4 concepts that form reality together), Acausality (Type 1 and 4; Views time as an illusion, and is comparable to Grandfather Spider and Grandmother Raven, who exist beyond the past and the future, as well as existence itself. Infused his magic into the Player, who then became unbound by cosmic rules and the regular order of the universe), Petrification, Healing, Light Manipulation, Space-Time Manipulation (Should scale to Grandfather Spider), Shapeshifting, Sand Manipulation, Electricity Manipulation, Energy Manipulation, Water Manipulation, Probability Manipulation (Can cast spells that nullify probability to 0% and increases his own to 100% or even higher), Incorporeality (His "body" is made of pure magic, as he is its source), Non-Physical Interaction (Can harm intangible, Non-Corporal and Non-Existent beings), Status Effect Inducement, Morality Manipulation, Creation and Mind Manipulation (A mere fraction of the Song of Creation made the Broodmother lose all morals and fall under Morganthe's control) Resistance Negation to Magic

Attack Potency: Low Complex Multiverse level (Even while weakened, Bartleby sang The Song of Creation alongside The Player to reweave the threads of reality and reset existence to its rightful order. Existence is composed of an infinite number of infinite multiverses that is constantly expanding and is reflected through the reflection caves. Stated he is the only one who can defeat Raven who previously defeated and sealed away Grandfather Spider, which possibly makes him the strongest character in the game besides The Creator)

Speed: Omnipresent (His heart is connected to all the countless worlds in the universe and his roots stretch out to hold them together. He has been stated to have his roots stretch invisibly across every world.)

Intelligence: Nigh-Omniscience (Grandmother Raven gave Bartleby the Eye of History and the Eye of the Future, which would allow him to know everything throughout the past and the future, however he cannot see the outcomes of battles between other cosmic beings)

Note: For a summary of how magic works in Wizard101, click here.