VS Battles Wiki
Register
Don't have an account?
Sign In
in: One Piece, Characters, Male Characters,
and 25 more 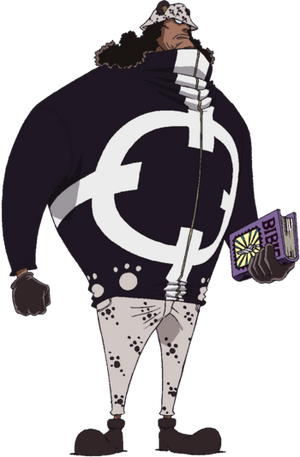 Bartholomew Kuma is a Shichibukai, formerly a Revolutionary with a bounty of 296,000,000. He was once feared as an extremely vicious pirate, earning himself the title, "Tyrant". He is a type of cyborg called "Pacifista" developed by Dr. Vegapunk. Once Vegapunk finished his modifications on Kuma, the Shichibukai was converted into the first complete Pacifista cyborg, with the serial PX-0, and figuratively died in the process.

Kuma is an enormous man, (22'6" tall). He is the tallest remaining Shichibukai (being one inch shorter than former member Gekko Moriah) and is usually seen carrying a Bible. His overall appearance resembles that of a bear, though there are a few key differences. His eyes are strangely covered by either a pair of glasses or clear-mirrored lenses. While initially he will give the impression of wearing glasses, it seems that, based on the Pacifistas that were destroyed, those are actually his own eyes.

Powers and Abilities: Superhuman Physical Characteristics, Large Size (Type 0), Cyborgization (Kuma was transformed into a cyborg by Vegapunk, after turning into PX-0 he became a lifeless machine), Attack Reflection (Can repel or deflect matter and physical attacks via pads on his palms), Air Manipulation (Can create air pressure blasts and shock waves), BFR (Can send opponents across the world with a touch), Limited Pain Manipulation (Can push a persons pain and fatigue from their body and push it into another person), Breath Attack, Energy Projection, Heat Manipulation, Explosion Manipulation and Limited Light Manipulation (Can shoot laser beams that explode upon contact and can instantly melt steel), Self-Sustenance (Types 1, 2 and 3), Durability Negation (Via Pad Ho), Extrasensory Perception and Limited Information Analysis (Able to detect any pirate like other pacifists), Pseudo-Teleportation (Can repel himself at incredible speeds, making his movements seem like teleportation), Immunity to Pain Manipulation (Does not feel pain) and Resistance to Mind Manipulation (For being a mindless robot).

Attack Potency: At least Small City level (His Ursa shock is this strong), likely higher (He was one of Monkey D. Dragon's commanders and is potentially comparable to the likes of Sabo), can ignore durability with his Devil Fruit powers | Unknown

Speed: At least Massively Hypersonic+, Possibly far higher Combat Speed (Vastly faster than Pre Time-skip Gear 2nd Luffy. He was capable of finding an opening within Rayleigh and Kizaru's duel before he got between them), possibly Speed of Light Travel Speed via repulsion (Got in between Silvers Rayleigh and Kizaru while they were in a heated duel and claimed to his opponents to be capable of repelling air at the Speed of Light, though it is questionable if he is implying that he can move his arms at such speeds), Speed of Light Attack Speed with Laser Beams (can generate beams of light that function identically to Kizaru's version) | Unknown

Durability: At least Small City level, likely higher (Can take being in the vicinity of his own Ursa shock. None of the Thriller Bark Saga Strawhats including Sanji and Franky could significantly harm him. Sanji's leg nearly broke from the recoil of kicking Kuma's jaw with Kuma feeling nothing. Roronoa Zoro could barely scratch the machinery on Kuma with one of his attacks, but this still did nothing to Kuma other than catch him by surprise. He was left unscathed after taking attacks from Ivankov, and is more durable than the Pacifista that were created in his image) | Unknown

Stamina: Very high due to being a cyborg, and does not feel pain or fatigue

Range: At least several hundred meters with attacks, possibly planetary with his ability to repell objects from his hand (Scattered the Straw Hat pirates around their planet, sending several out of the Grand Line itself)

Intelligence: Skilled and battle-hardened combatant, with extensive experience as Shichibukai, has mastered his own combat style. He has a vast Geographical knowledge, capable of accurately setting the destination of targets that he repels in order to send them to specific locations around the world. He should also have some extensive knowledge with science, due to his cybernetic enhancements, and his experience in being with Vegapunk--who is considered to be 500 years ahead the rest of the world by a technological stand-point. | After his brain was altered and he lost his sense of self, he is nothing more than a machine.

Weaknesses: Kuma literally cannot swim and becomes immobilized if more than half of his body is covered in water; he needs to use his hands to deflect attacks