VS Battles Wiki
Register
Don't have an account?
Sign In
Advertisement
in: Tier 8, Tier 8-C, Characters,
and 32 more 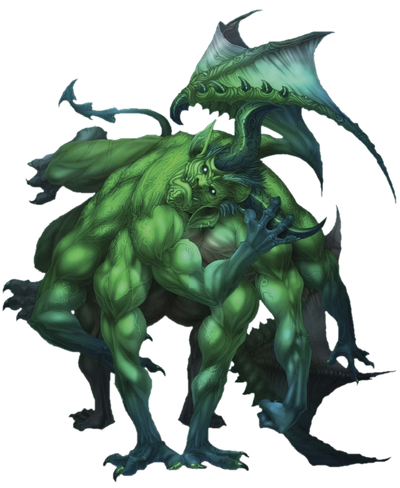 Even among other demons, Baroques inspire disgust and revulsion. They are completely chaotic creatures, created from the union of dozens of small fragments of different evil souls with a minor Fifth Hierarchy demon. As a result, these twisted creatures are born with the power to alter natural laws; everything around them constantly mutates. Their bodies, large masses of flesh filled with arms, legs, wings, and heads, continually change. Every moment, new limbs emerge while others disappear, creating a strange feeling of instability in those who see them. They do not have a particular native color, but rather slowly alter it across the visible spectrum.

The Baroques are, at least compared to other demons of the same status, ignorant and undisciplined. They tend to disobey orders and act on their own initiative. Their interest in the souls of the dead is limited to a voracious appetite that drives them to consume, but they care very little for the power they gain. Killing someone just to taste the spiritual remains of his soul is more than enough. They dislike the company of other demons, except other Baroques, and only follow the instructions of Third Hierarchy demons when violently forced to. They cannot communicate in any known language but merely produce monstrous growls and screams.

Baroques do not deal with mortals under any circumstances. They immediately attack anyone whose path they cross unless they are forced to do otherwise by a superior in the demonic hierarchy or by a summoner. Many live in diverse dark places across Gaïa, such as old temples dedicated to malignant deities or dark portals to the Wake.

Classification: Being Between Worlds, Distortion Demon of the Fourth Hierarchy

Superhuman Physical Characteristics, Self-Sustenance (All types), Regeneration (Low), Abstract Existence (Type 1) (Demons are living embodiments of a elemental, primal evil as real as light or darkness), Possession, Soul Manipulation, Conceptual Manipulation (Type 1), Absorption, Empowerment, Creation (All demons can steal or consume a soul's power and use it to enhance themselves or create more demons. congregations of demons can even destroy souls with their mere presence alone. Baroques also have Gnosis 25, granting them abnormal control over the Soul Flux and the ability to ignore its influence somewhat), Corruption (All demons can form contracts that "corrupt" the benefactor. Becoming too closely linked to a demon causes a piece of pure evil to nest within one's soul), Non-Physical Interaction (Capable of harming energy, elemental and immaterial beings, souls/concepts, ghosts, and even nonexistent beings, such as the Etrien Gnosos), Durability Negation (Those who can harm energy do so by attacking one's every essence, ignoring armor and damage barriers completely), Dimensional Travel (All demons can traverse the boundary between the real world and Flow of Souls, allowing them to appear both on Gaia and within The Wake), Natural Weaponry, Shapeshifting (The body of a Baroque is constantly shifting, growing or losing limbs or even changing color entirely), Reality Warping, Law Manipulation, Chaos Manipulation, Gravity Manipulation, Spatial Manipulation, Light Manipulation, Darkness Manipulation, Heat Manipulation, BFR, Biological Manipulation, Age Manipulation, Death Manipulation, Life Manipulation (The Baroque's presence causes the laws of reality to cease functioning, causing unpredictable alterations and changes to its surroundings, such as the reversal of gravity, the grotesque coiling and twisting of anything nearby, extreme brightness or darkness, the reversal and radical exaggeration of temperatures to the point that even merely warm places are instantly frozen solid, forced teleportation of a random distance in a random direction and even the total alteration of an object's physiology or shape, potentially causing instant death), Resistance, Invulnerability, Damage Reduction, and Immortality (Type 5) Negation (Those with Gnosis can ignore the resistances, immortality, and damage reducing effects of those with lower Gnosis, as well as damage them through invulnerability and spiritual barriers), Enhanced Senses (Via Notice and Search)

Speed: Athletic Human Movement Speed (Can run at over 9 m/s), Supersonic Combat Speed (Those who have achieved Inhumanity are stated to be able to walk through a hail of bullets without being harmed)

Durability: Building level (Can take hits from those comparable to itself)

Range: Extended Melee Range, varies from Several Meters to Tens of Meters with Aura of Distortion

Intelligence: Animalistic (Cannot speak any known language, merely communicating in a series of growls and screams, and lacks any real tactical skills)

Standard Tactics: Baroques launch themselves after any living being they see; they do not feel a need to find a reason to fight. Malignant and violent, these demons need no motivation to kill. Their combat tactics solely involve attacking their enemies continuously until none are left alive, completely ignoring the benefits they receive from their aura.

Weaknesses: Holy and/or sacred objects and places are extremely harmful to them. The range of their Aura of Distortion is dependent on the chaos present in their surroundings, shrinking to as little as 10 feet in mundane areas