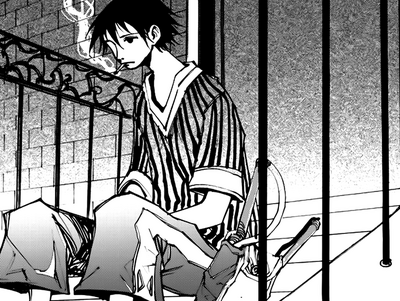 Baroona born into slavery was the champion Gladiator in Daraak. After tirelessly fighting in the ring for many years, he suddenly disappeared and ran off to Chronos, where he joined the Temple Mercenaries. He fights and is very skilled with what appears to be two knives which are connected by a long rope, a weapon called the Double-Dagger Rope Dart.

Known to many in Daraak as the champion Gladiator, Baroona is a hardened experienced fighter who has fought for his life for many years in the ring, where a person can only come out dead or alive.

Baroona acquired his techniques and weapon from his master, a former gladiator who he sadly had to kill in a duel in the Daraak Gladiator Stadium. Baroona is very accomplished with the "hard to master" weapon to the point that he can attack his opponents from different angles and swiftly incapacitate his opponents. Though he is highly skilled with his signature weapon, his prowess with the sword is average at best against seasoned fighters.

Baroona is skilled with the Double-Dagger Rope Dart, a weapon similar to that of Rikion's chain sword. In close quarter combat, Baroona would use his double daggers with proficiency, either stabbing or slashing his enemies. Though in long range combat, he would throw his daggers via swinging them at unpredictable high speeds and by using the force of the swing, he can critically wound his opponents. The skill at which he throws his daggers have been known to even penetrate the armor of the Elite Guards of Minos.

Retrieved from "https://vsbattles.fandom.com/wiki/Baroona?oldid=4107610"
Community content is available under CC-BY-SA unless otherwise noted.