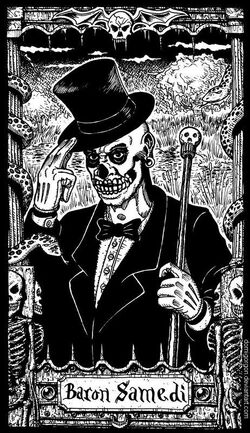 Baron Samedi is a loa of the dead in Haitian Vodou, and is the leader of the Guédé.

Classification: Spirit of the dead, loa

Powers and Abilities: Dimensional Travel (Can travel between dimensions, though this drains his energy), Magic, Possession, Invisibility, Immortality (Type 1, 5, and 7), Pain Resistance, Non-Corporeal, Resurrection, Non-Physical Interaction (Can interact with the spirit world, as well as with his siblings), Abstract Existence, Death Manipulation, Life Manipulation, Healing (Is often called upon for healing, able to bring those close to death to full health. This includes if the subject has a disease, curse, attacked by black magic, or hexed) Power Bestowal (Can grant humans immortality by refusing to burry them or take them to the afterlife), Curse Manipulation and Resistance, Self-Sustenance (Types 1, 2, and 3), Soul Manipulation, Rot Inducement (Ensures that the dead decompose in the ground to keep them from coming back as the undead)

Attack Potency: At least Street level+ physically (Can fight with other loa; Baron Kriminel threatened to bite chunks off the arms of the dead if he doesn't like the food he's given, meaning he's likely able to bite through bone. Being the leader of the loa in Guédé, Baron Samedi should at least be comparable to Baron Kriminel), abilities bypass durability

Retrieved from "https://vsbattles.fandom.com/wiki/Baron_Samedi?oldid=4738497"
Community content is available under CC-BY-SA unless otherwise noted.