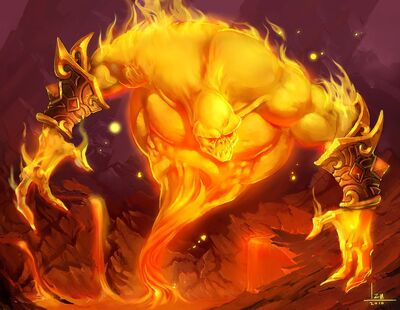 Baron Geddon is one of the eldest of all fire elementals and Ragnaros’s right hand during the beginning of the war against the titans. During one of the first battles against the titan attackers, Geddon was defeated and forced into humiliating retreat, causing him to be demoted. His replacement was the flamewaker Majordomo Executus. Geddon was infuriated that a creature not purely of fire replaced him, a noble among the elementals, and thus in an effort to regain his master’s faith, Baron Geddon planned the now legendary betrayal of Thunderaan the Windseeker. In the midst of a great battle, Geddon separated the massive lightning elemental from his allies, and together with Garr and Ragnaros, they ambushed the great elemental in an effort to steal his power.

Attack Potency: At least City level (One of the three figures responsible for the defeat of Prince Thunderaan, who is likely stronger than the Conclave of Wind due to being their superior and also due to having been promoted as the new replacement Elemental Lord for Al'Akir as possibly the second or third most powerful wind elemental of Azeroth. Comparable in power to the lieutenants of the other elemental forces).

Speed: Unknown (Can contest against Thunderaan who claims to be "everywhere")

Striking Strength: At least City Class (Comparable to the other Elemental Lieutenants).

Range: Tens of meters. Comparable to Garr who possesses a range of 45 yards.

Intelligence: Unknown. Among the oldest and most experienced of Azeroth and the Fireland’s fire elementals. An extremely capable tactician and strategist who was able to lead the legendary betrayal against Thunderaan.

Armageddon: An ability that renders a single individual unable to move or perform any form of magic.

Inferno: An ability that involves Geddon’s fiery aura. While casting, Geddon will burn all those nearby on various intervals, though he is unable to effectively move while utilizing this ability.

Ignite Mana: A magic-based ability that ignites an opponent’s magic power, causing one’s magical energy to spontaneously combust and damage an individual from the inside-out while rendering the magic power unusable.

Living Bomb: Baron Geddon’s most notable ability. Geddon casts a spell on an individual such that, in ten seconds, an individual will spontaneously combust and eventually explode. This ability is notably unable to be nullified by any form of anti-magic, though it can be shielded against.

Self-Destruction: Upon near-defeat, Baron Geddon self-destructs, as if he had casted Living Bomb on himself, though the magnitude of the blast will be significantly greater.

Baron Geddon in Hearthstone
Add a photo to this gallery

Retrieved from "https://vsbattles.fandom.com/wiki/Baron_Geddon?oldid=5579814"
Community content is available under CC-BY-SA unless otherwise noted.