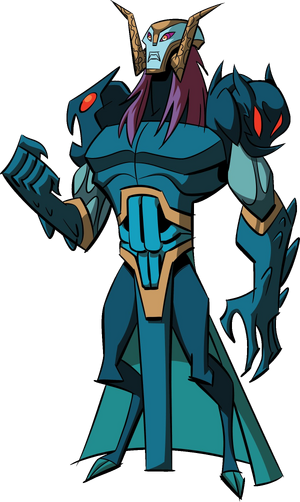 Baron Draxum is the primary antagonist of the television series, Rise of the Teenage Mutant Ninja Turtles. He is an alchemist who strives to create a world where mutants will reign above the surface world, converting all humans into mutants. He tried to create a powerful army of mutants by fusing animal DNA with that of an action-movie star and martial arts master, Lou Jitsu. While he did successfully fuse the DNA of Lou into four baby turtles, Lou later burned his lab to the ground and escaped with the aforementioned turtles. The Turtles later return in his life in the form of Raphael, Donatello, Leonardo and Michelangelo, who constantly thwart his advances to mutant people and animals.

After an encounter with the Foot Clan, Baron Draxum along with his minions would join the Foot Clan as secondary members. He only joined because He was promised that he would be able to aquire the entirety of the "Dark Armor". Unsatisfied with his rank, Draxum tried to do whatever he could to increase his ranking within the Foot Clan. He eventually found success in mutating a Human Groundskeeper into a mutated flower, allowing him to simultaneously disarm both the turtles and the Foot themselves. Now outranking the masters of the Foot, Draxum was able to become the current leader of the Foot Clan, ruling over them with an iron fist.

Attack Potency: Large Town level (Fought on par with all of the Turtles at once, who are capable of harming him)

Speed: Hypersonic+ (Blitzed and easily avoided all the Turtles fighting him at once)

Standard Equipment: A variety of alchemy tools and technology

Intelligence: Genius; Master of alchemy and genetic mutation. Has shown vast knowledge on how to use futuristic technology.

Retrieved from "https://vsbattles.fandom.com/wiki/Baron_Draxum?oldid=5624311"
Community content is available under CC-BY-SA unless otherwise noted.