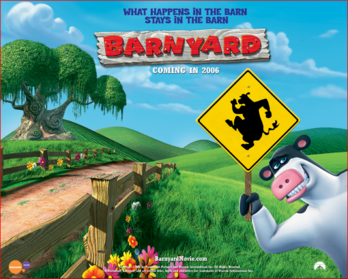 For detailed information about this series, visit the WikiBarn.

Barnyard is a computer-animated franchise, created for Nickelodeon by Steve Oedekerk. The franchise follows the adventures of Otis, a bull who loves to party with his fiends Pip, Freddy, Peck, Pig, Miles, Abby, Bessy, and Duke on a barnyard while the Farmer goes away for the day. When the humans aren't around, they have parties, play pranks, and have adventures without letting humans know that they can walk and talk. Unfortunately, several humans are trying to expose them and get rich. Luckily, Otis always comes with a plan to keep their secrets from humans and to protect the Barnyard from evil enemies.

Not too strong, but not too weak either. The series sits comfortably at Wall level and holding interesting abilities such as Toon Force and Regeneration. Otis also possesses useful powers including Mind Manipulation, Creation and Explosion Manipulation. Pig is fully capable of manipulating the plot by delaying it during suspenseful and dangerous moments.

Ben
Add a photo to this gallery