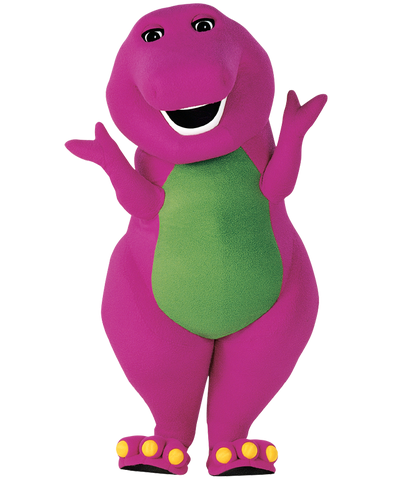 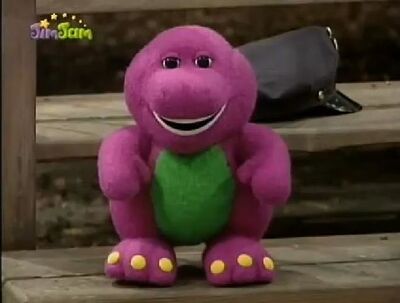 Barney is a friendly, purple dinosaur originated from a doll that was brought to "life" thanks to the strong imagination of children, bringing love to everyone in his path.

Tier: At least 9-B, likely far higher with imagination-based powers

Powers and Abilities: Superhuman Physical Characteristics, Self-Sustenance (Types 1), Longevity (Possibly Type 1 Immortality), Magic, Transformation (Via doll form), Light Manipulation (Controls sparkles. Made a rainbow), Breaking the Fourth Wall, Enhanced Senses (Could see the color change of an egg at a great distance), Broadway Force, Cloth Manipulation (As seen here), Summoning and Dimensional Storage (Via imagination or Barney Bag), Weather Manipulation (Via Magic Jars), Plant Manipulation (Turned the leaves of a tree brown), Animal Manipulation, Immersion and Portal Creation (Shown here), Telekinesis (Moved a bunch of leaves, managed to force a pile of wood to fly), Size Manipulation (Can make things smaller or bigger), Air Manipulation (When transforming he can emit a gust of wind. Can also create one via blowing), Teleportation, Transmutation (Turned a toy rocket into an actual one and vice-versa. Turned kids into robots. Changed clothing's colors), Subjective Reality (Via his imagination, has shown to be able to turn a meatball into a tree, among numerous other feats), Time Manipulation (Via Nightimer, can change day and night), Creation (Made a bunch of food and decoratives out of his sparkles), Heat Manipulation (Cooked a pizza in seconds), Life Manipulation (Created Baby Bop and a dog), Limited Age Manipulation (Hatched an egg into a chick)

Attack Potency: At least Wall level (Stronger than BJ, who could casually knock out a tree, which holds this power), likely far higher with imagination (Froze an area up to seemingly the horizon)

Speed: Subsonic (He looks like a blur to some people when hiding. Faster than Tosha, who could do this)

Stamina: Questionable (High in some circumstances, but most of the time is left short of breath after even mildly exercising)

Intelligence: At least Above Average (Seemingly knows a great amount of information in a variety of fields and has traveled a good majority of the world, befriending people seemingly in their own native language, making him an extreme polyglot. Should also have over 200 million years worth of experience)

Weaknesses: His personality is strongly against violence, which includes fighting. He can't move while in doll form (except his eyes), but teleportation and reshaping mitigate that. His weather manipulation has a time limit of about an hour and also grants those in the affected area the appropriate clothing for it while it lasts.

Barney - I Love You (SONG with LYRICS)

Barney references Jurassic Park
Add a photo to this gallery

Retrieved from "https://vsbattles.fandom.com/wiki/Barney_the_Dinosaur?oldid=6041489"
Community content is available under CC-BY-SA unless otherwise noted.