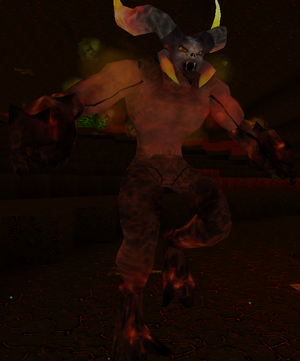 Barlog is a hostile being and brother to the Source of Life and Ice Elemental from Block Story.

Powers and Abilities: Superhuman Physical Characteristics, Resurrection, Regeneration, Master hand-to-hand combatant, Immortality (Type 8; Once his soul was absorbed, Barlog can still revive from the spawner as long as it's unscathed) Resistance to Fire / Healing

Attack Potency: At least Multi-City Block level+ (His attack is even higher than TNT explosion which can generate this much energy)

Speed: Massively Hypersonic (Somewhat slower than - albeit still comparable to - the Dragon Rider; can fight against entities such as Ashkore)

Weaknesses: If his soul is consumed, he cannot be reborn on his own. However, absorber can place his spawner and Barlog will be able to revive near him, but the destruction of the spawner will not allow Barlog to be reborn again; Cold attacks cause more damage than to other creatures

Retrieved from "https://vsbattles.fandom.com/wiki/Barlog?oldid=6605714"
Community content is available under CC-BY-SA unless otherwise noted.