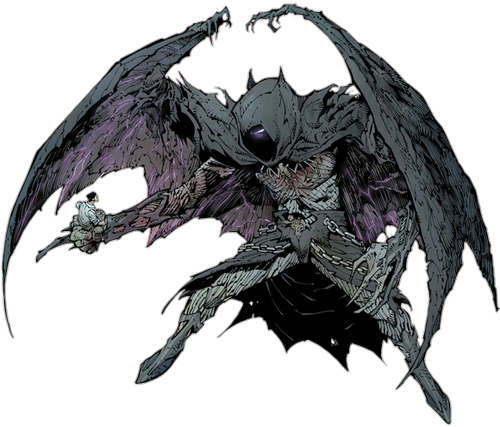 Barbatos, also know as Great Dragon or Bat-God, is the ruler of the Dark Multiverse. Once his sole purpose was to destroy the unstable universes created by his master, who crafted universes from the fears and hopes of all beings within the Multiverse, and return their energies to the World Forge. Barbatos eventually killed his master and corrupted the World Forge.

Later, Barbatos planned to absorb the regular DC multiverse into his own. He was able to come to Earth at some point, but was repelled by Hawkman and Hawkgirl at the cost of their lives. When Batman was sent to the dawn of humanity by Darkseid, Barbatos noticed him and decided to turn him into a portal to enter the regular multiverse.

The Court of Owls manipulated events throughout history in order for Batman to be injected with four of the five metals needed to create the portal, and after the fifth was injected in the present day, Barbatos was able to transport himself and the Dark Knights to the Earth with the intent of sinking all universes into the nightmarish Dark Multiverse.

Attack Potency: Multiverse level+ (Killed the World Forger in the Dark Multiverse), Low Complex Multiverse via Anti-Music (Shook the strings of the multiverse and disrupted the multiverse with his scream). He can ignore conventional durability by sending others into a neverending nightmare)

Speed: Massively FTL+ (Comparable to Wonder Woman and Superman who are swifter than Green Lanterns, Mon-El, and Karate Kid)

Intelligence: Extraordinary Genius. Barbatos is a highly skilled manipulator capable of having what he want by letting others hope and then crush them after. He once fooled Superman with a fake call from Batman that he heard while he was under Barbatos's grip and he has crushed Batman's mind. He can also use his manipulative skills to influence others to join him by making them losing all hopes. Barbatos possesses vast knowledge about the Dark Multiverse and its working, knowledge he has shared with the Batman who Laughs.

Weaknesses: Barbatos is vulnerable to certain metals. The Tenth Metal/Element X of the New Gods is the purest and the most effective against him. Following this, the Nth Metal, although less effective than the tenth, is pure enough to harm Barbatos.