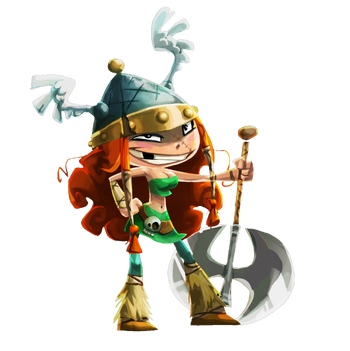 Barbara is one of the main protagonists of the Rayman video game series created by Ubisoft. She is a young and beautiful human barbarian girl/princess who becomes Rayman's travel companion after he and his friends rescued her in the forest world of Rayman Legends, later abandoning her sheltered princess life for a more dangerous and exciting one since Rayman Adventures.

Powers and Abilities: Superhuman Physical Characteristics, Weapon Mastery (Via her battle axe and shovel), Limited Flight (Can float in the air by using wings on her helmet to slow the descent of her fall), Underwater Breathing (Type 2; Can hold her breath underwater indefinitely), Summoning (Can shoot out Blue Punch gloves from nowhere), Fire Manipulation (Can set her Blue Punch glove projectiles on fire by doing a charged/dash attack), Surface Scaling (Can run up slopes and vertical surfaces), Size Manipulation (Can shrink down or grow up by going through funnels), Breath Attack and Air Manipulation (Can suck up nearby Lums via Inhalers), Enhanced Senses (Can seek out hidden items and trapped Teensies via Seekers), Temporary Invulnerability (Can make herself invincible for a short period of time after taking damage via Protectors)

Attack Potency: Varies from Small Country level to Solar System level (Comparable to Rayman, Globox and Teensies, even being able to hurt/damage them. Can also send Dark Teensies flying through space and shake constellations upon impact with a charged attack, yielding this much force. Struck the Armored Toad hard enough to stagger him, who seemingly overpowered Rayman)

Speed: Varies from Massively Hypersonic to Sub-Relativistic (Can keep up with Rayman and his friends. Is able to dodge lasers from the Mechanical Dragon) with Massively FTL+ attack speed

Range: Standard melee range with her battle axe/shovel, higher by extending it through a chain/with power-ups

Weaknesses: Barbara's lust for action can make her headstrong

Retrieved from "https://vsbattles.fandom.com/wiki/Barbara_(Rayman)?oldid=6154950"
Community content is available under CC-BY-SA unless otherwise noted.