VS Battles Wiki
Register
Don't have an account?
Sign In
Advertisement
in: Characters, Genshin Impact, Tier 10,
and 19 more 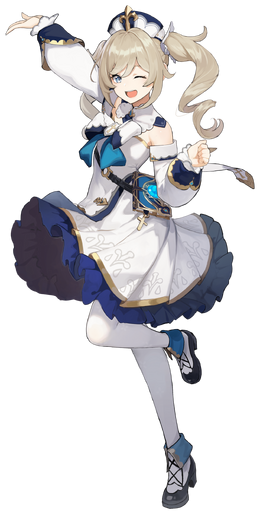 She is the sister of Jean, the acting Grand Master of the Knights of Favonious, and thus constantly feels overshadowed by her skills and talents. Despite this, Barbara continues to persevere and spends every day singing to make the citizens of Mondstadt as happy as they can be.

Tier: likely 10-B, possibly 10-A physically, Unknown, possibly Low 7-B with magic

Powers and Abilities: Superhuman Physical Characteristics, Magic, Water Manipulation, Enhanced Stamina (with Glorious Season), Summoning and Limited Telekinesis (Barbara can freely summon and telekinetically move her primary weapon), Transformation, Flight (can transform into Hydro energy for greater mobility, increased speed and flight), and Forcefield Creation (like all Allogenes, Barbara can erect an elemental shield to defend against attacks from far stronger opponents), Statistics Amplification (with Vitality Burst and Magic Guide), Healing, Energy Absorption, Resurrection (with Dedicating Everything to You), Damage Boost (with the Purest Companionship, which increases the potency of Let the Show Begin)

Attack Potency: Human level possibly Athlete level physically (Has received combat training in the past. Can also run from Mondstadt to Dragonspine and back in a relatively short amount of time), Unknown, possibly Small City level with Magic (Despite having no combat related feats, she should be able to defeat Hilichurls, who can pose a threat to trained combatants in large enough numbers. This is backed up by the fact that she claims to be able to handle a group of Treasure Hoarders by herself simply by having a Vision, only being defeated "after a while").

Speed: Likely Massively Hypersonic (While being inferior, she should be comparable to trained Vision users like Razor).

Stamina: High. Barbara can run from Mondstadt to Dragonspine without any visible fatigue. She can also reduce her stamina consumption while using Let The Show Begin♪ with Glorious Season

Intelligence: At least Average. Barbara has received combat training as a child, and can defeat several trained Treasure Hoarders at once

Weaknesses: Barbara is depressed, but she hides it with her positive attitude

Hydro Vision: A Vision is a gift from the gods of Teyvat that allows humans to wield elemental powers, turning them into Allogenes. Barbara's Vision is Hydro-attributed, thus granting her the ability to freely manipulate water.