VS Battles Wiki
Register
Don't have an account?
Sign In
Advertisement
in: Tier 1, Tier 1-C, Digimon,
and 36 more 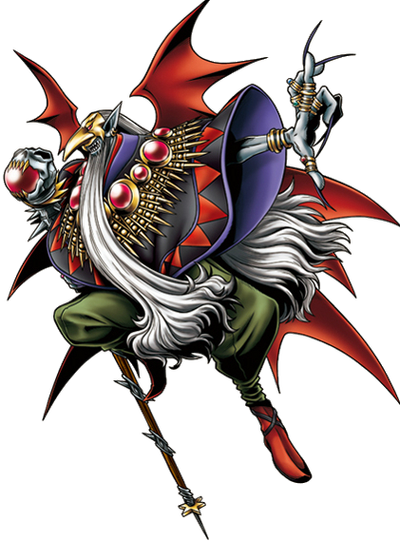 Barbamon is a Demon Lord Digimon with the appearance of a long-bearded old man, it is one of the Seven Great Demon Lords, representing Saturn and the sin of Greed. It resides within the heart of the Dark Area, the den of demons, and manipulates Fallen Angel Digimon to run the whole gamut of evil. It is obsessed with all of the treasure which exists within the Network, so out of avarice, and regardless of the means, it has a cruel personality with a greed that would kill Digimon just for a piece of treasure. It is the foremost and most cunning schemer of the Seven Great Demon Lords, and can easily manipulate the Mega-level Ghoulmon in addition to Fallen Angel Digimon. 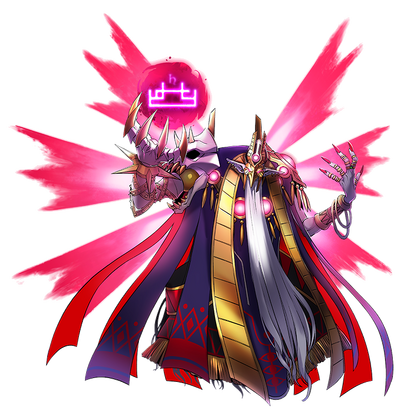 It fused its demonic staff Death Lure with its right arm to link directly to its magic, and now controls its techniques more skillfully.

Age: Existed since the creation of the Digital World

Superhuman Physical Characteristics, Digimon Physiology, Holy Power, Darkside Power, Nonexistent Physiology (Physical. Barbamon is a nonexistent being as a natural inhabitant of the Dark Area), Darkness Manipulation, Fire Manipulation, Hellfire Manipulation and Conceptual Erasure with Pandæmonium Lost and Dark Inferno (The Flames of Hell/Dark Area aka El Evangelo are purifying flames that erase those who are burnt by them. This goes so far as to being able to erase even the Seven Great Demon Lords and erase one beyond death in which in Digimon death means nothingness. Whether the flames erase one beyond nothingness is dependent on whether they are evil or not. If evil, the one who is erased will be erased beyond nothingness), Energy Manipulation, Morality Manipulation, Genius Intelligence, Immortality (Types 1, 5, 7 and 8; It was stated that as long as evil exist in the hearts of man, the Demon Lords shall be reborn), Spatial Manipulation, Time Manipulation, Regeneration (High-Mid), Plant Manipulation, Regeneration and Resurrection Negation (Mid-Godly), Dimensional BFR (Can banish foes to the Dark Area where they are erased into nothingness and become aspects of the Seven Great Demon Lords), Power Mimicry (Inherits the powers of those he absorbs), Acausality (Type 1), Abstract Existence (Embodies the Sin of Greed in which is a primal factor of the multiverse), Conceptual Manipulation, Existence Erasure, Resurrection (Can bring others back from nonexistence), Resistance to Conceptual Attacks (Resisted getting his very concept attacked by Boltboutamon) and Existence Erasure.

All Barbamon Abilities greatly amplified, Durability Negation and Transmutation via Seventh Jewelrize (Rips out the opponent's essence and turns it into a jewel).

Speed: Immeasurable (A native of the Dark Area, a realm in which time does not exist. Should be above basic Eaters, who have no concept of time. Equal to Lilithmon) | Immeasurable (On the same level of Yggdrasil, who was capable of perceiving and fighting within Higher Dimensional space) | Immeasurable (Comparable to UlforceVeedramon) | Nigh-Omnipresent within the Digital World Multiverse (All seven Demon Lords managed to spread their presence across the spectrum of space and time on a multiversal scale and are tied to the Digital World itself), otherwise Immeasurable (Embodies the sin of Greed, which transcends space and time)

Stamina: Very High, was able to keep up with three Mega level Digimon at once in "Digimon World: Data Squad" | Godlike, possibly even limitless

Standard Equipment: His staff "Death Lure" | Yggdrasil itself, allowing him to control the fabric of the Digital World

Intelligence: Barbamon is arguably the most crafty amongst the Demon Lords, commanding and manipulating entire hordes of Fallen Angel Digimon along with Ghoulmon, who is described as a "god of destruction" and even tricking his fellow Demon Lords into doing his bidding, stealing of Lilithmon and tricking a berserk Lucemon into killing Beelzemon in Digimon World: Re:Digitze. In addition, in Digimon Next he hatched a plot to take over Yggdrasil and succeeded, fusing with the computer and effectively making himself the commander of the Digital World's space-time, only failing to account for the long-forgotten legend of the Arbitrators who would strike Yggdrasil (and Barbamon) down should it become corrupt.

Weaknesses: As the embodiment of avarice, Barbamon is greedy to a fault, which can be used to manipulate or distract him.