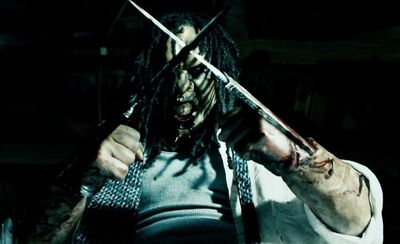 Alan Zane was once a normal plastic surgeon, until one of his patients died. Driven insane by his failure, he pierced and modified his face, sharpened his teeth, and attached two large blades into his forearms. He became known as Baraka. He later fought and killed Johnny Cage in kombat.

Speed: Athletic Human (Is a skilled martial artist, able to keep up with Cage in kombat)

Intelligence: Above average (Is a skilled doctor and was able to attach blades to his arms surgically)

Retrieved from "https://vsbattles.fandom.com/wiki/Baraka_(Mortal_Kombat:_Rebirth)?oldid=5393209"
Community content is available under CC-BY-SA unless otherwise noted.