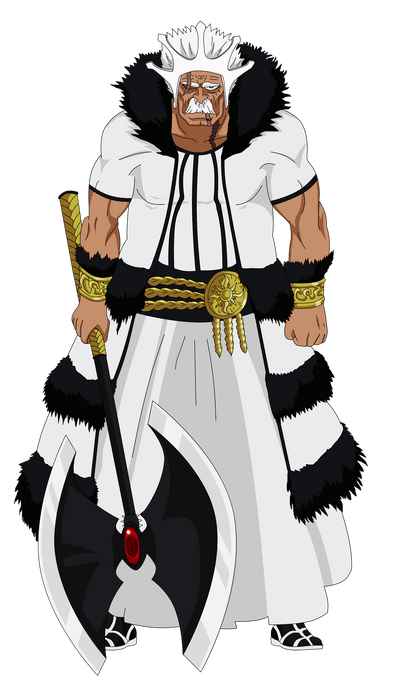 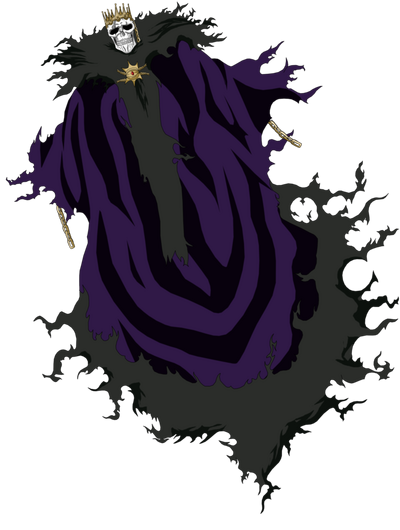 Powers and Abilities: Superhuman Physical Characteristics, Expert Axemanship, Pseudo-flight, Spiritual Awareness (Can see invisible spirits and objects), Extrasensory Perception (Can sense beings with Reiatsu), Longevity, Energy Projection, Limited Spatial Manipulation (Gran Rey Cero is so powerful that it disrupts the surrounding space), Can take his reiryoku and exert it as reiatsu, Statistics Amplification (Can enhance his speed with Sonído and harden his skin with Hierro), Dimensional Travel and Portal Creation with Descorrer, BFR (With Caja Negación), Time Dilation (Can reduce the speed of any target which comes near him with Senescencia), Corrosion Inducement, Durability Negation and Age Manipulation (Can accelerate the age of whatever he touches, causing the appropriate damage which comes with aging. Can age and deteriorate every object around him in Resurrección. Can dissolve Kidō using Respira), Transformation (With Resurrección), Regeneration (Low with Resurrección), Soul Manipulation (Arrancar and Hollows can extract and consume souls), Forcefield Creation (Over Age and Time manipulation. He has a different power covering the surface of his body that repelled his own power), Invisibility, Non-Physical Interaction (Can harm and interact with intangible spirits and objects), Overwhelming Aura (Spiritual pressure can passively induce ailments ranging from paralysis to fear inducement), Resistance to Soul Manipulation

Stamina: Very high. Vastly weaker characters can fight for days without issue and also with injuries that would be fatal to even the hardiest of normal humans. Capable of fighting even with his body rotting away.

Intelligence: Baraggan is quite the insightful character as his apperance may give. He was able to deduce that the Jūreichi was a fake and its four pillars needed to be destroyed first in order to reveal the real Jūreichi. In fact, he further concluded that the four pillars would be in the cardinal points. He is also quite the effective leader as he commanded large armies of Hollows when he was originally king of Hueco Mundo thousands of years ago.

Weaknesses: The barrier he uses to protect himself from the effects of his ability can be negated if his Respira somehow enters his own body.

Descorrer: An Arrancar technique that allows them to travel between Hueco Mundo and the Living World.

Senescencia: Baraggan's aspect of death as an Espada is aging. He possesses abilities based around time manipulation due to it.

Arrogante: Baraggan's Resurrección that is released upon the command Decay. His person is entirely shrouded in a dark cloak and his body is transformed to a skeleton with a crown. It grants new abilities and further amplifies his previous abilities.

Gran Caída
Add a photo to this gallery