VS Battles Wiki
Register
Don't have an account?
Sign In
Advertisement
in: Characters, Banjo-Kazooie, Game Characters,
and 74 more 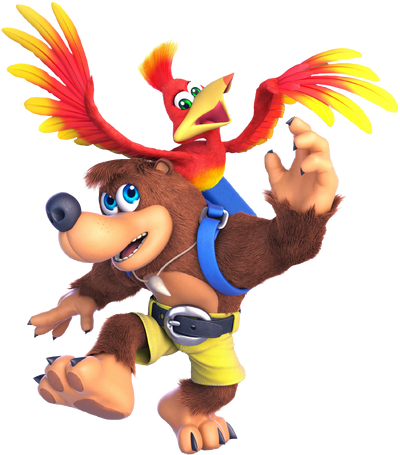 The hero of the Banjo-Kazooie games, Banjo is a gullible, lazy being who, unless forced to go on an adventure, is usually just laying around Spiral Mountain, sleeping, eating, or playing video games.

Banjo is also accompanied by Kazooie, a snarky, mean-spirited sidekick. Most of the time, she resides in Banjo's backpack, although Banjo-Tooie (second installment) finally allows her to trek outside of it. Together they go on numerous adventures to stop the evil witch Gruntilda from succeeding with her next evil plan.

Age: Unknown biologically, had been 'created' 10 years ago.

Superhuman Physical Characteristics, Gravity Manipulation (To a low extent), Flight (Kazooie), Natural Weaponry (via Banjo's claws and Kazooie's beak and wings), Telekinesis and Matter Manipulation via the Magic Wrench, Invulnerability (Powered by golden feathers), Electricity Manipulation, Ice Manipulation, Fire Manipulation, Explosion Manipulation and Status Effect Inducement (With Kazooie's Battery, Ice, Fire and Grenade eggs respectively), Summoning (With Clockwork Eggs. Can summon vehicles with the Magic Wrench), Body Control (Kazooie can form her beak into a drill head, among other things), Fourth Wall Awareness, Vehicular Mastery (Can drive/pilot numerous different vehicles), Weapon Mastery, Size Manipulation, Resistance to Heat Manipulation (Jumped inside a burning boiler and they were both completely unaffected. Banjo is unaffected by far hotter temperatures when inside the Shack Pack), Breath Attack (Via Dragon Kazooie), Stealth Mastery (They were able to steal the Sacred Relic from the Unga Bungas without them noticing), Toon Force, limited Homing Attack (Via the HOMING cheat), Healing (Through sleeping in his backpack and the HONEYBACK cheat), Regeneration (Mid, regenerated from being crushed in just a few seconds), Non-Physical Interaction (Can harm Gruntilda's soul), Possible Telepathy (Can 'speak' to characters whey they are nowhere near them), Acausality (Type 1, can interact with alternate versions of themselves from other timelines with no ill effects), Magic and Portal Creation via Jiggies (Jiggies are objects with powerful magic strong enough to open the way to other worlds)

Attack Potency: At least Multi-City Block level+ (Harmed Gruntilda. Banjo and Kazooie have directly fought the HAG-1 which created earthquakes powerful enough to shake Banjo's house from hundreds of meters away violently enough to cause Mumbo Jumbo to fall from his chair, and likely cause rubble to fall in Gruntilda's lair, which should make it at least a Magnitude 5 earthquake. Comparable to Gruntilda, who completely blew up the Hag-1 by accident and who could tank this without seeming to be harmed), higher with Grenade Eggs (They deal 3x as much damage to enemies, including Gruntilda, than regular eggs), likely Town level (Can harm other characters with similar durability to themselves) | At least Multi-City Block level+, possibly Town level via vehicle (Was able to destroy Grunty's Vehicle which had enough power to destroy Spiral Mountain, could directly harm Gruntilda. Their vehicles should be comparable to the Hag-1)

Speed: Supersonic via Banjo (Can dodge cannonballs from the Ghost Pirate). Supersonic+ travel speed (For Kazooie who can dodge attacks from the Stompanadon). Hypersonic combat speed and travel speed with Turbo Trainers and vehicles

Lifting Strength: Superhuman, Class M via the Magic Wrench (It can lift a plane with relative ease, lifted a massive trash can filled with old video games and flipped it over)

Striking Strength: At least Multi-City Block Class+, possibly Town Class (They can harm enemies with comparable durability to themselves with regular hits)

Stamina: High (Although Banjo is lazy, both he and Kazooie have been involved with long adventures without much rest)

Intelligence: Fairly intelligent. They are both skilled combatants who are able to use a variety of special team moves and strategies. On top of this, they have extensive mechanical knowledge, knowing how to operate and build advanced vehicles like Cars, Planes, Boats, etc.

Weaknesses: Kazooie is very hot headed and Banjo can be lazy at times, weaker when separated

Key: Base | With Vehicles

Ren (Ren and Stimpy) Ren's Profile (Speed was equal, and Ren was bloodlusted)