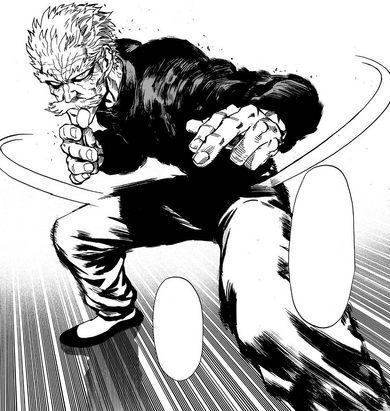 Bang (バング) also known as Silver Fang (シルバーファング Shirubā Fangu) is an S-Class, rank 3, a superhero for the Heroes Association, settled in Z-City. Bang owns a dojo passed down from generations and uses the fighting style the Rock-Smashing Water Stream Fist. He has an older brother named Bomb, who is the master of Whirlwind Iron Cutting Fist. He is also Garou's former mentor.

Attack Potency: City level (Defeated Superalloy Darkshine in a one-sided sparring match, despite the latter having greater physical prowess. Shattered Elder Centipede's armor with Bomb. While critically beaten down and severely weakened, he one-shot a transformed Fuhrer Ugly and Gums)

Lifting Strength: At least Class M (Raised a large boulder by jumping onto it. Stronger than Suiryu, who can lift half a stadium with his leg)

Durability: City level (No-sold a direct strike from Melzalgald. Took minimal damage from being knocked back by Elder Centipede)

Stamina: Very High (Can fight against multiple Dragons while injured and tired)

Intelligence: Gifted. He's a master martial artist with decades of experience. His mastery of martial arts is displayed in a sparring match against a fellow S-Class hero, Superalloy Darkshine, whom Bang was able to defeat in a one-sided bout.

Weaknesses: Bang is unwilling to learn new techniques and methods to beat an opponent or to think outside the box, as he put it, "You can't teach an old dog new tricks." 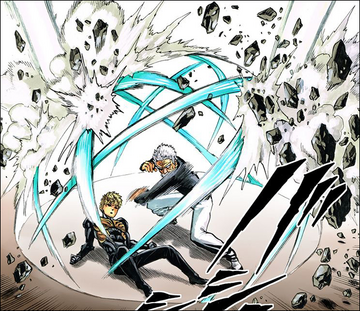