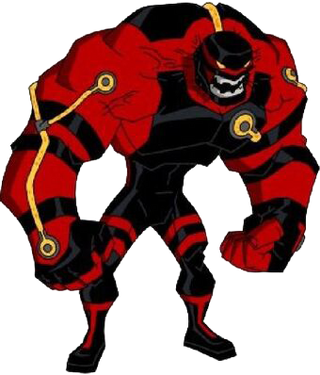 Bane is a hitman and professional mercenary, who, when using a powerful drug Venom, becomes monstrous in size and shape, and is undoubtedly The Batman's most threatening physical foe.

His Power Infusion Module (The equipment that delivers his Venom) is a system of tubes that stretch around his body, activated by a dial on his hand. He acquired this when he volunteered for special physical enhancements in the Amazon, said to be a prototype.

Attack Potency: At least Wall level, possibly higher (Comparable to Batman, could tear through an armored truck with ease) | Likely Small Building level (Vastly stronger than before, could partially tear through the thick materials of a bank vault door)

Speed: At least Supersonic combat and reaction speed (Can somewhat keep up with Batman)

Durability: At least Wall level, possibly higher (Shrugged off being thrown into an armored truck hard enough to leave a huge dent) | Likely Small Building level (None of Batman's weapons could do anything to his armor and skin, and even other people using Venom can tank attacks strong enough to blast through durable walls)

Intelligence: Above Average (Highly skilled and is knowledgeable on explosives, as they used them to destroy an armored van that he knew would pass over a specific street, all of this just to call out to Batman)

Weaknesses: His Venom doesn't boost his speed and is weak to electricity. The tubes that lead the Venom supplies all over his body are fairly weak.

Key: Base | With Venom

Bane's transformation, as shown in the Season 3 Opening
Add a photo to this gallery

Retrieved from "https://vsbattles.fandom.com/wiki/Bane_(The_Batman)?oldid=6050864"
Community content is available under CC-BY-SA unless otherwise noted.