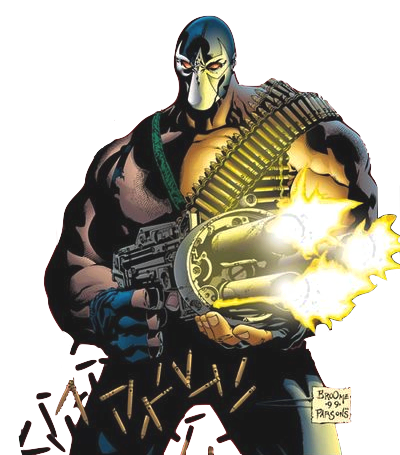 Bane is a world-class fighter and tactical genius who enhances his great physical strength with a steroid called Venom, making him one of Batman's greatest and most dangerous enemies. In addition to being one of the only men ever to independently figure out Batman's secret identity, he has also been an anti-hero, a government agent, a mercenary and a dictator.

Speed: Massively Hypersonic (Should not be overwhelmingly slower than Katana)

Intelligence: Genius. Bane possesses an astounding intellect. He knows 9 languages, being able to speak fluent Spanish, German, French, Russian, Mandarin, English, Urdu, Farsi, and Latin, and possesses eidetic memory, which borders on almost total recall. Bane has also demonstrated that he is exceptionally knowledgeable in various subjects including various Sciences, History, Geology, Medicine, and several others. He is a formidable fighter, able to hold his own against Batman and Ra's Al Ghul. He is not only a master but has created several fighting styles. It took 1 year for him to find out that Batman's true identity was Bruce Wayne, is highly devious, and a superb strategist, and tactician. Even Ra's al Ghul says that Bane "has a mind equal to the greatest he has known". Additionally, he is considered a great escapologist, surpassed only by Batman, Nightwing, and Mister Miracle in the art of infiltration and escape.

Weaknesses: Removing the tubes feeding him venom from his back to turn him back to base, the more Venom he ingests can cause him to become little more than a berserker in time.

Feats: (Note that all of these feats were without Venom)

Key: Base | Amplified by Venom

Classic appearance
Add a photo to this gallery