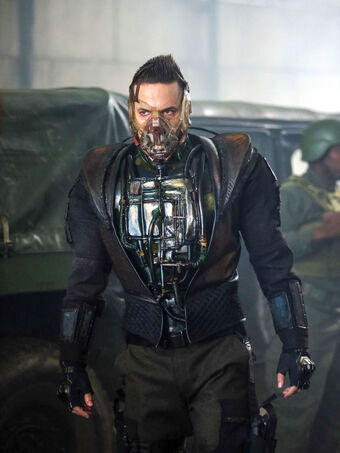 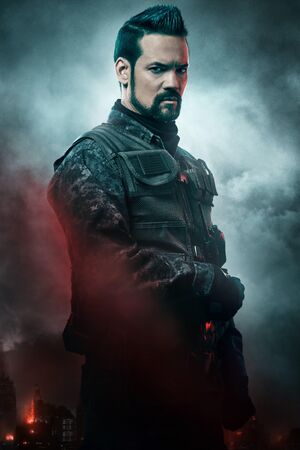 Bane, formerly known as Eduardo Dorrance, is the leader of Delta Force and an old military buddy of Jim Gordon. He is currently employed and loyal to his boss, Nyssa al Ghul, and became determined to complete his mission and eliminate all of the criminal elements in Gotham and is complicit in all of the murders Walker has committed.

He was mortally wounded in a fight with Jim, but Walker preserves his life so that Hugo Strange could save him, leading to him taking up the mantle of "Bane".

He is a major antagonist in Gotham's Season 5.

Attack Potency: Street level physically, higher with weapons (Stronger than regular fighters due to his military training. Was of self-exhuming himself from being buried alive by the guards in Peña Duro. Is equal to Jim Gordon and nearly defeated him) | Wall level (Can easily crush heads with his bare hands. Snapped the neck of a nurse with one hand by pushing her and casually lifted Alfred above his head and throw him against a metal pole hard enough to break his spine. Almost killed the latter and Selina Kyle after they met)

Lifting Strength: Peak Human (Comparable to Jim Godon) | At least Class 1 (Can easily throw full-grown men like they are nothing. Snapping necks require this much force)

Striking Strength: Street Class (On par with Jim Gordon and can hurt the likes of him) | Wall Class (Can crush skulls with his bare hands)

Durability: Street level (Survived being impaled through the chest by a rebar, though he needed specialized equipment in order to survive from that point onward) | Wall level (Can easily survive being run over by a car without harm and hit by a point-blank explosion and remain standing like it was nothing)

Intelligence: Gifted. As the leader of Delta Force and an experienced soldier, Eduardo is well trained in multiple military strategy and tactics, leading his men with great efficiency during their operation in Gotham City. He is also a skilled manipulator and planner, tracking down Jim Gordon to The Sirens based on his past relationship with Barbara Kean, and hiding his true purpose from his old friend until revealing himself.