VS Battles Wiki
Register
Don't have an account?
Sign In
Advertisement
in: Male Characters, Characters, Gods,
and 20 more 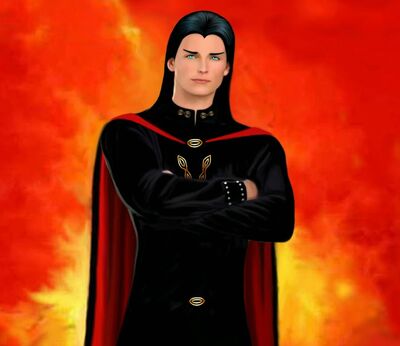 Bane is the main protagonist of the Demon Lord Chronicles. Transformed into a mortal god and raised by the dark god Arkonen the Black Lord in the Underworld, he was set loose upon the Overworld in a ploy to free Arkonen from his imprisonment. Upon freeing Arkonen, he was betrayed and left for dead, though he was saved by the healer Mirra. Upon regaining his strength and realizing his love for Mirra, Bane trapped Arkonen in the Underworld once more. However, he was discovered to be Tar-Merin by the God Kayos, meaning he was unable to be corrupted by the dark power, and thus a potent force for good in a world where Light Gods had no means of fighting against Dark Gods, and Bane agreed to help Kayos save his daughter who had been imprisoned by another Dark God.

Tier: 7-B, Unknown via Reality Warping

Superhuman Physical Characteristics, Longevity (Stated that he will live for around 1000 years), Time Manipulation (Can slow time to a crawl, can travel through time to a limited degree), Teleportation and Aportation (Can teleport himself and those touching him, or teleport objects from far away to where he wishes), Weather Manipulation, Matter Manipulation (Can reshape matter on an atomic level), Transmutation and Petrification (Is able to reshape and change any chemical or classical element to another, can turn people and gods to stone), Elemental Manipulation (Control over fire, water, earth and air), Invisibility, True Flight, Fire Manipulation (Can control dark fire), Creation (Can instantly create any non-living object), Summoning (Of demons and Hellhounds), Curse Manipulation, Biological Manipulation, Mind Control, Soul Destruction, Absorption (Can absorb dark power to strengthen himself, acquires the knowledge and memories of souls he destroys), Resurrection (Upon death he will return as a Spirit God), Extrasensory Perception (With his God Sight he can see souls and their level of corruption, can sense the past states of matter), Clairvoyance (With his Eyes he can remotely view locations and people), BFR (Can banish demons to hell), Sleep Manipulation (Can mentally command others to sleep), Dream Manipulation (Can project his consciousness into the Sea of Dreams to view the dreams of others - whether they are sleeping or not, though it is more difficult if they are awake - and can contact others through dreams), Limited Reactive Evolution (Mortal Gods sometimes gain new abilities in response to their needs. However, this is random and unreliable in battle), Non-Physical Interaction (Has destroyed fire and air demons, and destroyed souls), Reality Warping (Casually changed day to night, can "force the domain's [world's] fabric to bend to his will"), Intangibility, Sound Manipulation (Can restrict other's ability to speak), Telekinesis (Threw Telvaron away with his mind), Telepathy (Can read minds on contact, his presence psychically translates all languages for both himself and others), Sealing (Can create wards capable of trapping gods of comparable power in hell), Portal Creation, Illusion Creation

Resistance to Time Manipulation (Can break free of other God's time manipulation, resisted having his personal time being reversed by several aeons), Soul Manipulation (Has an incorruptible soul, his soul cannot be reached until his body suffers enough damage), Fate Manipulation (Gods can choose to stand outside of fate, and are only bound by it when they choose to be), Absorption (His power is "locked" within his flesh, and cannot be absorbed, even by other Gods, was able to slow and resist the effects of a enchanted chest attempting to absorb him into itself), Biological Manipulation (His flesh is described as "immutable", returning to its natural form within moments, he has twice as many genes as a normal human, with the duplicates acting as backups), Radiation Manipulation (His blood was unchanged after being bombarded with numerous forms of radiation during an experiment), Mind Manipulation (Constantly resists the corrupting influence of the Dark Power, was unaffected by supernatural seduction from another God, cannot be controlled by other Dark Gods), Matter Manipulation (As a celestial being, albeit a mortal one, Bane is resistant to matter manipulation, Telvaron - who can also control matter - stated that their powers would counter each other), Darkness Manipulation (Unnaffected by the Dark Power, even when it is wielded against him by a stronger Dark God), Curse Manipulation (Has a ward carved into his chest that protects against curses, undid a curse that changed his hand into a claw within seconds), Teleportation (One of the wards carved into his chest protects him from being summoned), and Fire Manipulation (Lived within the fiery Underworld until he became an adult, the shields beneath his skin protect him from fire, described as immune to fire by Telvaron, an ancient and extremely powerful and intelligent dark god), Immune to diseases

Attack Potency: City Level (Capable of clearing vast stretches of cloud cover in an instant with his black flames, fought Arkonen whose presence in the Overworld summoned clouds thick enough to completely block out the sun across an entire country within a few minutes, physically fought Dark Gods superior to Arkonen, reformed a completely destroyed city in a few moments), Unknown via Reality Warping (Casually changed day to night, though due to verse cosmology it is unknown it is unclear whether he actually altered a sun like our own), can ignore durability with several of his powers

Speed: At least Superhuman (Stated to be far superior physically to even the strongest mortal soldier)

Durability: Likely City level physically (Can withstand his own power), at least City level with forcefields (has blocked attacks from comparable opponents without harm)

Stamina: Extremely high, was able to battle a god of comparable power for several hours without rest.

Standard Equipment: None, though tends to create swords during battles, but throws them away after.

Intelligence: High. He is quite strategic in battle, often using time manipulation to avoid or land hits, and setting traps for enemies in the middle of combat.

Weaknesses: Normal human weaknesses. If using his inborn God powers without the use of the Dark Power, he requires either contact or several minutes of concentration for more extensive use of his powers. His sealing requires his target to already be where they are to be sealed and also takes a few minutes to set the wards (although he does not need to create and finish them in one go)

Note: This character is incredibly prone to Plot-Induced Stupidity. Bane, who can physically fight beings who can cut through solid metal with casual attacks and shrug off being covered in magma, has been knocked into a coma by a stone thrown by an average villager. He required several minutes of intense concentration to repair a city with matter manipulation, yet was able to possibly move celestial bodies with a gesture while half-asleep. As such, this profile has been made using his strongest showings.