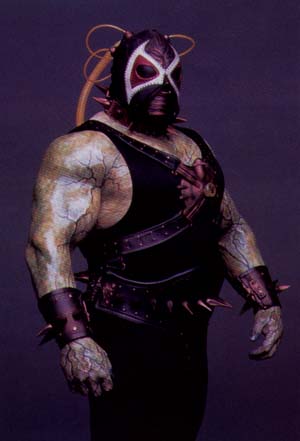 Bane was originally a prisoner, called Antonio Diego, in the South American jail of Pena Duro, who apparently served a life sentence for murder. He was selected to be the test subject for military experiments involving the drug Venom, Venom and was Dr. Woodrue's first successful subject. Originally, Diego was comparatively scrawny and diminutive, but when Venom started to take effect, he turned into a hulking monster with superhuman strength, or the "ideal killing machine", in Dr. Woodrue's words.

Attack Potency: At least Wall level (Overpowered Batman. Easily made a crater in concrete by just stomping on the floor. Can break walls)

Durability: At least Wall level (Survived a fall from over 7000 feet into the ocean. Tanked Batman's punches with little to no issue, and Batman was only able to knock him out with a metal pipe)

Weaknesses: When he is disconnected to Venom, he reverts immediately back to his normal, scrawny self.

Retrieved from "https://vsbattles.fandom.com/wiki/Bane_(Burtonverse)?oldid=6050862"
Community content is available under CC-BY-SA unless otherwise noted.