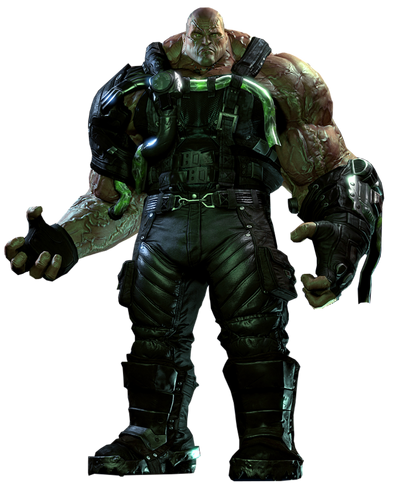 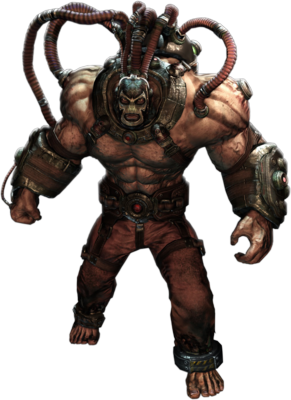 Bane is one of the most iconic archenemies of the Batman who was adapted on into Rocksteady's Arkham game series, with little changes from his original comic depiction. He was son of a criminal from the fictional country Santa Prisca. Due to his father escaping, Bane was forced to serve a life sentence on his behalf. Even getting incarcerated while still an infant. Bane's heart grew cold spending his childhood wrongfully behind bars, taking his first life by stabbing a man when he was 8. Due to his intense motivation perfecting his physical strength and mental intellect, Bane grew up to be leader of the prison. Despite having hundreds of the world's toughest men kneeling before him, there was still a man who struck fear into Bane's heart. Every night he would have disturbing nightmares of a bat-like vigilante who lived in Gotham. These dreams drove Bane to travel to Gotham and confront this caped crusader, hoping that his mind would be at peace once he killed the Dark Knight.

Powers and Abilities: Superhuman Physical Characteristics, Expert in hand to hand combat, Enhanced Longevity, Shockwave Generation, Regeneration (At least Mid-Low, Can use Venom as a type of medicine that can heal him from most injury, poison, wound, infection, and disease), Genius Intelligence, Preparation

Attack Potency: Small Building level (Strong enough to lift a full grown human by one hand, carry and support the weight of a rocket launcher and can shatter his enemies' bones with a few hits. Stronger than Batman, and broke his spine. Can easily shake entire rooms with his stomps) | At least Small Building level (Casually smashed through and ripped apart walls while enhanced with Venom without even needing to run. Far outclasses the Dark Knight in strength. Batman can only defeat him with weapons, strategy and exploitation of weaknesses, and was noted by Alfred to be capable of killing Batman in one hit if the TN-1 substance reached its full potential in Bane)

Speed: At least Supersonic+ (Easily capable of keeping pace with Batman. From meters back Bane can run towards Batman fast enough that he has trouble dodging his tackles)

Lifting Strength: At least Class 5 (Can effortlessly lift the Joker with his finger tips and toss him several feet back. Can easily overpower Batman) | At least Class 5 (Able to lift a Brute with each hand. Can easily rip stone pillars apart with his bare hands. Vastly dwarves the Dark Knight in terms of brute strength)

Striking Strength: Small Building Class (Can easily create gigantic shockwaves with his stomps that shake entire floors and viciously damage Batman) | At least Small Building Class (When he is enhanced, his strength increased to a point where he can demolish buildings and dismantle vehicles barehanded)

Durability: Small Building level (Can no-sell numerous hits from the Dark Knight and also no-sell hits from the Explosive Gel. Should scale to his own Attack Potency) | At least Small Building level (Can no-sell his own charges, which generate this much energy. Easily survived explosive gel potent enough to destroy the floor he was on. Displayed no signs of damage from the Batmobile's lethal strike and can recover in several hours from injuries that would take even Batman several weeks to recover from)

Intelligence: Genius level intellect almost on par with Batman's normally to the point he successfully discovered his identity and was able to outwit Batman once by attacking the Batcave without the latter realising it. Reverts to an uncontrollable, instinct driven beast if overdosed on Venom.

Weaknesses: His venom tubes are less durable then the rest of his body, and if they are cut they can cause him severe pain or even death. Bane's high intelligence also significantly decreases when he's on excessive amounts of venom.