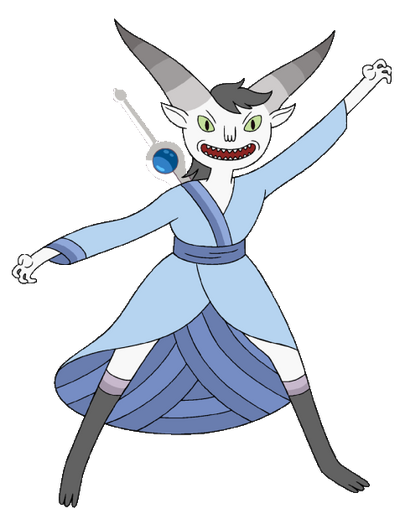 Bandit Princess is a minor antagonist in Adventure Time and the primary antagonist in the episode I am a Sword! She is a villainous princess of an unknown kingdom who found the Finn Sword after he lost it. Much of Bandit Princess' personality and origin is currently unknown, however she appears to be a cartoonishly evil character, slaying various inhabitants of Ooo, sacking their villages and stealing their wealth .

Age: Unknown. Probably around 16 (Appeared to be around as old as Finn)

Attack Potency: At least Moon level, likely Large Planet level (Briefly wielded the Finn Sword, which should at least as strong, if not stronger than the Demon Blood Sword, a weapon made from the blood of Kee-Oth, a demon, who even in a weakened state, was vastly superior to the Ice King. Traded blows with Finn and should be comparable to him)

Lifting Strength: At least Class K (Should be comparable to Finn in terms of strength)

Striking Strength: At least Moon Class, likely Large Planet Class (Should be comparable to Princess Bubblegum, who injured the Dark Cloud, a being who tanked a massive volcanic eruption with no real injuries)

Intelligence: Unknown (Appeared to be a rather skilled fighter, shown by her ability to effortlessly dispatch various villagers and guards and matched Finn in combat, even outsmarting him [granted, that's not a hard task] and getting the upper hand)

Retrieved from "https://vsbattles.fandom.com/wiki/Bandit_Princess?oldid=4640713"
Community content is available under CC-BY-SA unless otherwise noted.