VS Battles Wiki
Register
Don't have an account?
Sign In
Advertisement
in: Characters, Kirby, Game Characters,
and 49 more 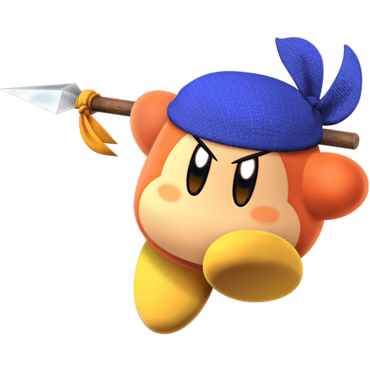 Bandana Waddle Dee, otherwise known as Bandana Dee or simply Waddle Dee, is a Waddle Dee who wears a blue bandana first seen in Kirby Super Star. He went from being an insignificant, unimportant character in his first appearances to being a prominent character that has appeared in every Kirby game to date since Kirby Mass Attack in 2011. In his debut, he only made a brief appearance in Megaton Punch, though the remake extends this appearance to Revenge of the King and takes over the role of Arena Waddle Dee. He can act as King Dedede's sidekick when going against Kirby or ally to the latter against challenges done by King Dedede. He's also a friend of Meta Knight, as everyone is to each other in Dreamland. Bandana Dee can also help Kirby & co. on larger heroic adventures, assisting in beating notable threats.

Superhuman Physical Characteristics, Non-Physical Interaction (Can kill Wapods and attack characters in their ghost forms), Self-Sustenance (Type 1), Toon Force and Elasticity (Like all Star Allies, he can survive being flattened and immediately restore his shape), Regeneration (Low-Mid. Like all Star Allies, he can quickly recover from being impaled by allies, by Flamberge's Barbecue Party or Beetle Kirby. Immediately recovered off-screen after being defeated by Kirby to watch his fight against Masked Dedede), Immortality (Type 3), Flight, Spear mastery, Parasol mastery, Vehicular Mastery, Transformation (Can imitate Kirby's transformations), Can turn into a small ball of intangible energy, 4th Wall Awareness, Energy Projection (Able to shoot raw energy) Resistance to Black Holes (Able to outrun and withstand black holes from Sphere Doomers, Master Crown-powered Magolor and Marx [The latter shown Post-Star Allies]. Notably able to briefly outrun and survive a black hole that was warping & sucking all the space of the shown battlefield, including stars in the background of it), Spatial Manipulation (Physically unaffected by said interstellar distortion and the sudden return to normal space has when the attack ends, otherwise only harmed if sucked by that black hole or reached by any space-based attack from Magolor)

As before, Magic, Resurrection (Able to revive others via Revival Spell. When dead, he can transform into a ghost to absorb some life-energy from a target and resurrect), Empathic Manipulation & Morality Manipulation via Friend Hearts (Can turn enemies into allies. Able to overwrite Void Termina's effects on allies; Scales to his multi-galactic potency), Healing & Purification (Friend Hearts can be used to heal and purify others. Can "Revive" defeated allies, who are merely unconscious), Cloth Manipulation, Power Bestowal (Turning targets into allies via Friend Hearts gives them that same power. Can bestow individual elemental powers when using them himself), Combining powers with allies he gains access to Fire Manipulation, Ice Manipulation, Electricity Manipulation, Air Manipulation and Water Manipulation, Creation (Able to help other Star Allies create Friend Stars and the Star Allies Sparkler), Regeneration (Low-Godly in Ghost form) Resistance to Transmutation (Like all Star Allies, he isn't transmuted after being cooked inside Chef Kawasaki and Cook Kirby's pot, a process that regularly turns foes and items into food), Empathic Manipulation & Morality Manipulation (Unaffected by the presence of the individual Dark Hearts), heat and cold (Unaffected by the temperatures of Blizzno Moon and Star Lavadom)

As before, his Parasol gives him Forcefield Creation & some forms of Water Manipulation, Likely Auto-Resurrection with Reviving Tomato (Only works once. Has shown to be in possession of a Reviving Tomato which he gives to Kirby or King Dedede, however, he never demonstrated to use it), Healing (With Maxim Tomato & various food items), Invulnerability with the Invincible Candy, Universal & Dimensional Travel via Warp Star

As before, Statistics Amplification (With Power-Up Hearts, which increase strength, health or speed of all allies at once), Healing (With health Power-Up Hearts), Summoning (Can summon Helpers by directly throwing Friend Hearts to Copy Essences. Can summon a Dream Friend using the Dream Rod), Homing Attack (With Star Allies Sparkler)

Loses an interpretable amount of powers from base, and has Incorporeality, Non-Physical Interaction, Immortality (Type 7. Has no health and can't be destroyed or defeated by others who can affect ghosts, unlike them), Self-Sustenance (Types 2 and 3), Flight, Limited Life-energy Absorption (Triggers the aforementioned regeneration of his physical body), Invisibility and Intangibility (Can actively become invisible and intangible, even to other ghosts and comparable beings who can affect ghosts), Resistance to Death Manipulation and Life Manipulation (Is a ghost. Given his lack of health, he can't be hit by other characters in Ghost form for them to revive, unlike living fighters and bosses. Can't recover health via healing items)

Attack Potency: Multi-Solar System level (Fought alongside Kirby, King Dedede, and Meta Knight to defeat a Master Crown-powered Magolor, which led to the collapse of interstellar parts of Another Dimension, including the 15 areas where the Sphere Doomers were fought, which are all respectively interstellar in size. Overpowered 2 Grab Hands from a Dark Crafter-possessed Claycia, one of them then repeatedly assaulted Kirby, overpowering him on contact and being up to Bandana Dee to always beat the Grab Hand, as "Kirby can't seem to defeat him". Won Dedede's Cake Royale alongside Kirby, beating various Kirby clones in the process) | At least Multi-Solar System level+, likely Galaxy level (Can assist Kirby & two fellow Star Allies in the defeat of Void Termina, Corrupt Hyness, the retaliators Three Mage-Sisters [at once], Morpho Knight EX and the stronger incarnations of Void Termina. Along with Gooey, Bandana Dee's one of the main partners Kirby can choose to defeat everyone in the Buddy Fighters Tower, the team of two faced inexplicable hordes of Kirbys, Bandana Waddle Dees, Gooeys and Magolors, and more notably they a few times defeated Shadow Kirby, Meta Knight and King Dedede, the former having "all the power of the real Kirby" and the latter two teaming up, ultimately amping themselves with the Masks of Dark Bonds but being stated that they would have been worthy opponents even without the masks), able to negate durability with Friend Hearts

Speed: Massively FTL+ (Kept up with Kirby, Meta Knight, King Dedede, Landia and Magolor. Repeatedly outran waves that were consuming interstellar parts of Another Dimension, which were moving fast enough to get past stars and nebulae in the background, as well as keeping up with the Lor Starcutter and Landia. Along with the other Star Allies, he can chase and keep up with the Jamba Hearts several times, which were suddenly scattered across the universe. Able to keep up with Galacta Knight, Marx, Ribbon, the Three Mage-Sisters and Void Termina)

Range: Extended melee range with his spears, longer with transformations. Interstellar with projectiles and shockwaves

Standard Equipment: Spears he can create out of nothing.

Intelligence: Average, vast combat skills. A master spear wielder and an experienced combatant who has gone toe to toe alongside Kirby on multiple occasions. Possesses vast combat skills due to being able to contend with, and defeat, Meta Knight, the Three Mage-Sisters, Hyness and Void Termina 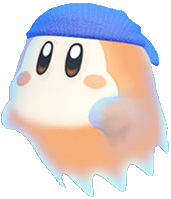 If Bandana Dee has one of these items when he is KO'd, it will automatically revive him to full health in a flash. It can also be used in the middle of combat as a normal Maxim Tomato.

When collected, Bandana Dee becomes invincible for a short time, and almost any enemy he touches will be instantly defeated, or at least damaged.

A vehicle that Bandana Dee can use, its charge attack is a powerful dash attack.

Another vehicle that he can use, its charge attack is a powerful electroshock that comes from its mouth area.

The Final Weapon in Star Allies, used to take out Void Termina. The Star Allies Sparkler fires projectiles from the tip, fly around quickly and efficiently, and spin counterclockwise to avoid all damage on a relative scale (Sparkler Turn). Kirby canonically took the lead in the center of the Sparkler while his friends rode in the tail. Still, the leader can be rotated to imbue the shots with a different element depending on the leader (the technique is called Rider Switch). The Sparkler can fire different homing projectiles with varying power depending on charge time. An uncharged shot is called the Sparkler Comet, and it fires a star-shaped projectile. A charged shot is called the Sparkler Starshot, and it fires a projectile shaped like two intertwining stars. The strongest attack is called Team Star Allies!, which, if everyone who's riding charges together and releases at the same time, fires a giant laser at the opponent. Bandana Dee uses this item on his own when used in The Ultimate Choice of Star Allies.

His pause screen description in Return to Dream Land