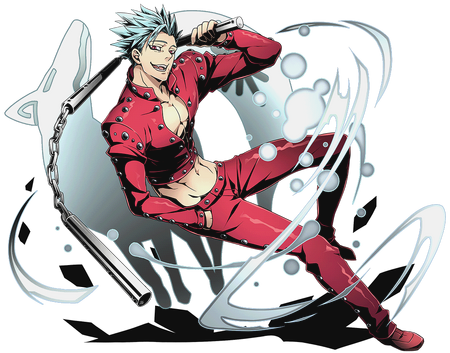 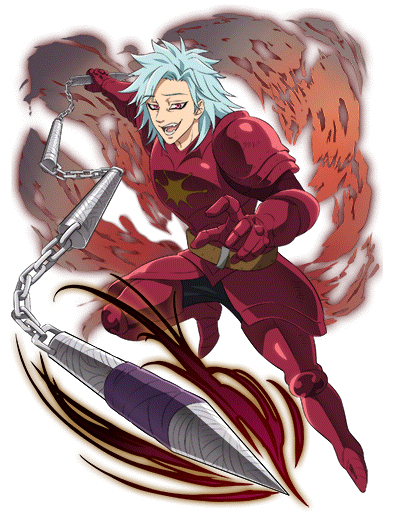 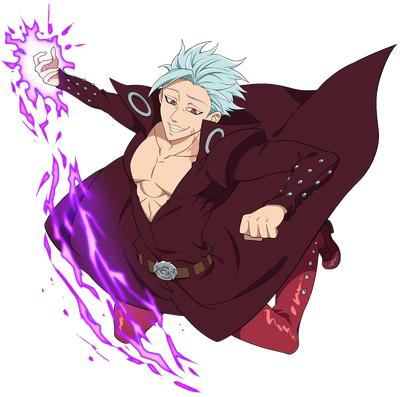 Ban is the Fox's Sin of Greed of the Seven Deadly Sins. He was formerly known as "Bandit Ban" during his earlier years and later as "Undead Ban," epithets explained by his infamy as a thief and because of his immortality. In the past he journeyed to the Fairy King's Forest to find the Fountain of Youth, encountering its guardian Elaine and falling in love with her in the process. As the Forest was being attacked by a Red Demon, Elaine forcefully gave the Fountain of Youth to Ban on her deathbed, allowing him to survive the battle. He was charged with the destruction of the Forest and murder of its guardian but couldn't be executed no matter what was tried. This led to him being conscripted into the Sins by Meliodas.

Ban used his blood to regrow the Fairy King's Forest and would later journey to Purgatory, where he lived for centuries trying to locate Meliodas' emotions. In the process he adapted to the extremely harsh environment of Purgatory.

Name: Ban, epithet "Undead" and (when he was younger) "Bandit"

Powers and Abilities: Superhuman Physical Characteristics, Magic, Extrasensory Perception, Immortality (Types 1 and 3), Self-Sustenance (Type 2), Expert Nunchucks Wielder, Martial Arts, Regeneration (Mid-High; can regenerate from being reduced to globs of blood and being burnt to ashes), Rage Power and Statistics Amplification (Increased his power with his emotions despite being heavily injured), Adaptation (Adapted to Purgatory's environment after being there for countless decades), Telekinesis (Can steal physical objects from afar through obstacles), Invisibility (Can completely suppress his presence and prevent others from seeing him), Absorption (Can steal the physical capabilities of others and add them to his own)

All previous abilities except for Immortality and Regeneration, Resistant to the following: Biological Manipulation (Purgatory transforms both physical and spiritual aspects of beings), Perception Manipulation, Poison, Acid, Heat, and Cold (After adapting to Purgatory he became unaffected by its environment. He was completely unaffected by the intensely toxic and caustic energy storm that the Demon King created)

Attack Potency: At least City level (Matched Sealed Unarmed Meliodas in arm wrestling and hurt him with punches), up to Mountain level, likely Island level with Snatch (Hunter Fest stole over half of Galand's raw physical power, as well as physical power from Melascula, Jericho, Elaine, and part of a nearby town) | At least Country level+ (Comparable to Post-Purgatory Base Meliodas. Traded blows with the Demon King in Meliodas' body, when nobody else could even scratch him), higher with Snatch (Should be able to steal strength greater than his own)

Durability: At least City level (Took hits from Sealed Base Meliodas), up to at least Mountain level, likely Island level with Snatch (Took hits from Galand who was at less than half of his base strength). Regeneration makes him almost impossible to kill unless circumvented | At least Country level+ (Took attacks from Demon King in Meliodas’ body, and regarded his toxic storm as an "Adorable Breeze"), higher with Snatch

Stamina: Extremely high (His regeneration further compliments his stamina, also able to survive with blatantly fatal injuries even when he can't regenerate).

Intelligence: As a member of the Seven Deadly Sins, Ban is one of the strongest and most skilled Holy Knights in all of Britannia. True to his former name "Bandit Ban", his strategy is using his ability Snatch to steal and sap his foes physical strength and using it against them, Ban is an expert hand-to-hand combatant and staff user. Due to his past as a thief, he has sticky fingers and is so fast that he can steal someone's teeth while they're in the middle of talking before they realize what happened and later sneaked up on the Ten Commandments and broke Melascula's neck before she could react. However, he doesn't always keep his cool and is seen to rarely get serious in a fight as a result of his useful regeneration ability, deciding to not going all out until he notices that he's dealing with a threat.

Weaknesses: He has a limit to how much strength and speed he can steal using Snatch, and when his time limit runs out he becomes fatigued to the point where he can no longer walk. After going to Purgatory, he lost his Immortality.

Snatch: Ban's magic power which allows him to steal things from others. He can remove objects from a distance, including his opponent's body parts and internal organs, but he is not limited to physical objects. Snatch also allows him to steal attributes like strength and speed from others, although he can only retain them for a limited time before he succumbs to fatigue. 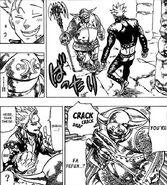 through his helmet
Add a photo to this gallery

and delivers a deep slash
Add a photo to this gallery

Extremely long range
Add a photo to this gallery 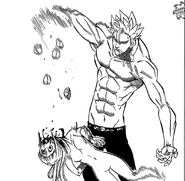 steals the strength from everyone nearby 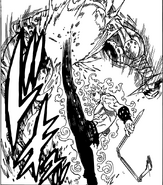 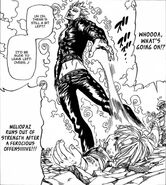 Steals all the strength and speed 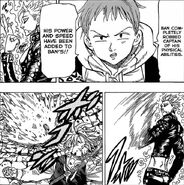 from Meliodas
Add a photo to this gallery

to suppress his presence

Start a Discussion Discussions about Ban (Nanatsu no Taizai)