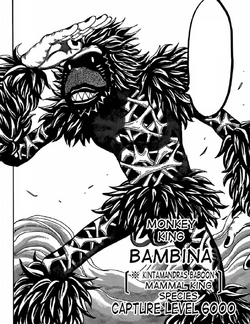 "Monkey King" Bambina is a Kintamandrill, one of the Eight Kings of the Gourmet World, who rules Area 7 with a chaotic and carefree attitude.

Powers and Abilities: Superhuman Physical Characteristics, Monkey Martial Arts (Enbu), Regeneration (At least Mid via scaling to weaker Monkeys who can regenerate their heads), Immortality (Type 3), Breath Attack (Can shoot Energy Blasts made of Appetite Energy from his mouth), Biological and Weather Manipulation (Can create habitats where all creatures can live), Resistance to Poison, Sound and Energy Manipulation

Attack Potency: Large Star level (Should not be weaker than unsealed Jirou. His strength is said to be greater than that of Heracles, though whether this is referring to his Contained form or True form is unclear. Punched Neo/Acacia with enough force to send him flying) | Large Star level (His power is greater than his contained form. Capable of obliterating parts of his own tail. Injured Neo/Acacia, sending him flying)

Speed: At least Relativistic+ (Casually played three "games" with Toriko and two of Coco's poison clones of Zebra and Sunny in the span of 0.1 seconds after roaring), likely FTL (Casually evaded half a dozen of Coco's mold spears at point blank range, which can travel at almost light speed) | Massively FTL (Blitzed Acacia before he could defend himself, blitzed fully aware NEO)

Lifting Strength: At least Class T (Consecutively throws 100G mountains at Mach 1 around the planet with no loss of speed in the projectile)

Striking Strength: Large Star Class (As Bambina is seen being at the top of the Enbu order, he is able to completely wreck planetoid sized continents and is also physically stronger than restricted Jirou) | Large Star Class

Durability: Large Star level (Survived a full power assault from the Four Heavenly Kings with little to no damage. Also survived and can somewhat counter a direct attack from NEO, but was injured in the process) | Large Star level (Is stronger than his contained form. Tanked a strike from Toriko, Sunny, Zebra and Coco, all with their power quadrupled)

Stamina: Incredibly high; natural habitat is a mountain which creates a force between 10 and 100G with an Atmosphere of 0% Oxygen, making natural breathing impossible

Range: Tens of kilometers (Cut through a mountain with its tail alone) | Multi-Planetary (Created a destructive shockwave that destroyed orbiting meteors and satellites and went through multiple planetary diameters)

Intelligence: As one of the Eight Kings, Bambina is an incredibly powerful and skilled combatant, casually defeating the Four Heavenly Kings in a split second while playing "games" with them and managing to take a serious Acacia by surprise. He is intelligent enough to create an entire style of combat for his fellow Monkeys that allow them to go toe-to-toe with experienced Bishoukuya on the level of the Four Heavenly Kings in addition to creating an entire complex hierarchy. However, despite being aware of events around the globe at all times, he is often too preoccupied with enjoying himself to care, rarely taking any fight seriously

Weaknesses: Bambina is sometimes too busy fooling around to focus on its objectives

Cracked Area 7 (which has area of 840 million sq. km, larger than Earth's surface area) in a flashback

Punched and destroyed the peak of 100G Mountain

Note: The following are not necessarily "attacks", but given the sheer power and strength of Bambina, they can be referred to as 'attacks' due to their unintended effects on his targets.