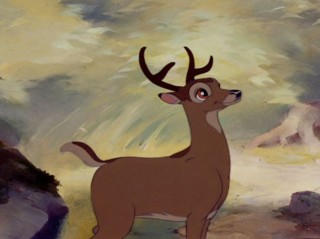 Bambi is the protagonist of Disney's 1942 animated feature film of the same name and its midquel. A deer living in a forest, he's best friends with Thumper (a rabbit) and Flower (a skunk). However, he was closest to his mother, who was shot on his first winter. Raised into a buck by his father, he strongly falls in love with his childhood sweetheart and love interest, Faline, and they end up, later on, having twin fawns, a son and daughter named Geno and Gurri, respectively.

Bambi originated as the main character in Felix Salten's Bambi, A Life in the Woods. He has made cameos in several Disney cartoons. In the Disney films, his species was changed from the roe deer to the white-tailed deer, which would be more familiar to American audiences.

Powers and Abilities: Peak Human Strength, Superhuman Durability and Speed, can use its horns to stab and slash, Enhanced Senses, can kick with his front legs

Speed: Superhuman (Outran hunting dogs as a kid, any deer can run fast enough to keep up with a car)

Durability: Street level possibly Wall level (Took a gunshot to the stomach and it was still able to run, survived a fall of several stories)

Note: This Bambi is not to be confused with the Sternritter, Bambietta Basterbine, who are also nicknamed Bambi.

Sun (Pokémon) Sun’s Profile (Sun was by himself, and speed was equalized)

William Afton (Five Nights At Freddy's) Afton’s profile (Speed was equalized, and Afton was in his first key)