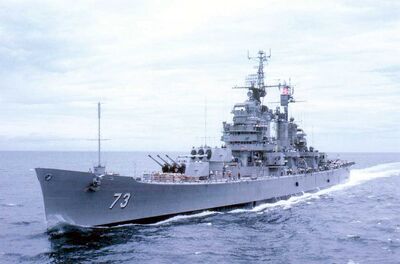 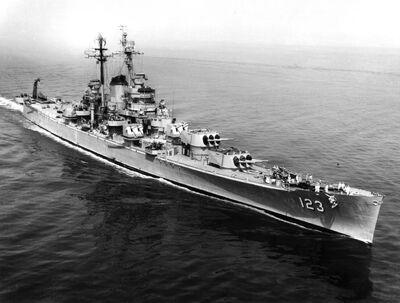 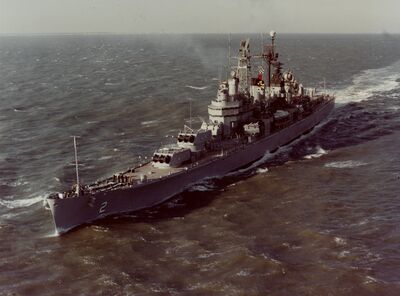 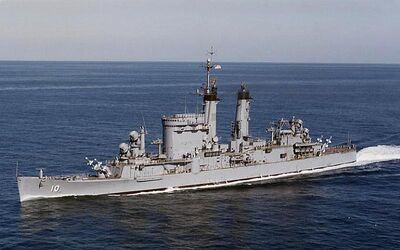 The Baltimore-class Heavy Cruiser was a large class of heavy cruisers in the United States Navy commissioned during or shortly after World War II. Fourteen Baltimores were completed, more than any other class of heavy cruiser, along with three ships of the Oregon City-class sub-class. Fast and heavily armed, the Baltimore cruisers were mainly used in World War II to protect the fast aircraft carriers in battle groups from air attack. Additionally, their 8"/55 (203mm) main guns and secondary 5"/38 (127mm) guns were regularly used to bombard land targets in support of amphibious landings. After the war, only six Baltimores and two Oregon City-class ships remained in service, while the rest were moved to the reserve fleet.

The Oregon City-class Heavy Cruiser was a modified version of the previous Baltimore-class design; the main difference was a more compact pyramidal superstructure with single trunked funnel, intended to improve the arcs of fire of the anti-aircraft guns. One ship—the third USS Northampton (CLC-1)—was laid down as an Oregon City-class heavy cruiser (CA–125), but was converted to a command light cruiser during construction.

The United States Navy's Boston-class Guided Missile Heavy Cruiser were officially the very first guided missile cruisers created in the world. Both ships in this experimental class were originally Baltimore-class heavy cruisers that had been decommissioned after World War II, but were redesignated as guided missile heavy cruisers (CAGs) and entered refit in 1952. Due to the experimental nature of the Boston-class, the ships were only partially converted, with full conversion to be carried out if the new systems were successful. Had the ships been fully converted, the forward 8" turrets would have been replaced with additional RIM-2 Terrier missile launchers. In 1968, both Boston-class guided missile heavy cruisers were reclassified back to heavy cruisers, due to the heavy use of their 8" guns for shore bombardment. While they retained their load of Terrier missiles, the rapid advance in technology rendered them obsolete after only a dozen years of service, and their main armament was once again their remaining 8" guns.

On 30 June 1958, Oregon City-class heavy cruiser USS Albany CA-123 was removed from commission to begin conversion into the first Albany-class Guided Missile Cruiser. On 1 November 1958, she was re-designated CG. The Albany spent the next four years undergoing very extensive modifications, stripped down to her hull to be fitted with a new superstructure. Albany was recommissioned at Boston on 3 November 1962. These cruisers were initially all-missile warships sporting no naval guns at all, but eventually two open-mount Mk 24 5"/38 caliber guns were added near their aft exhaust stacks. The Albany, along with two former Baltimore-class heavy cruisers, served until 1980, when they were decommissioned for the final time.

In use by: United States Navy

Material: The vertical belt armor was 6 inches (152mm) thick, tapering to 4 inches (102mm) at the base. Fore and after of the machinery and the horizontal deck armor was reduced to 3 inches (76.2mm) thick. The turrets were also heavily armored, between 3–6 inches (76–152mm) thick, while the command tower had the thickest armor, at 8 inches (203mm). End bulkheads were 5–6 inches (127–152mm) thick. The physical properties of the various armor types can be found on this table by Nathan Okun.

Durability: At least Large Building level, at most Multi-City Block level in terms of total destruction (comprised of up to 12,440,000 kilograms of hardened armor-grade steel with a fragmentation energy of over 991 gigajoules)

The Oregon City-class USS Northampton (CLC-1) command light cruiser is a particular exception, having been converted to command ship during construction and commissioned on 7 March 1953, being comparatively lightly (but admittedly more advanced) armed with:

Note: Similar ships of about the same type and period generally have performance equivalent to this one.

Retrieved from "https://vsbattles.fandom.com/wiki/Baltimore-class_Heavy_Cruiser?oldid=6375265"
Community content is available under CC-BY-SA unless otherwise noted.