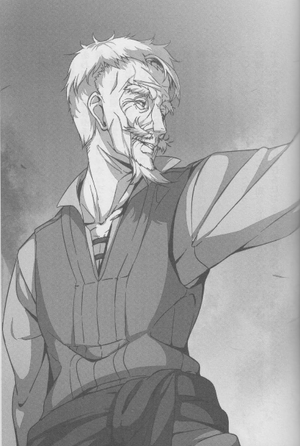 Baltasar Basil de Balzac is the former head of the Balzac House, a noble family in the Belgarian Empire, known for its swordsmanship techniques. Baltasar himself was considered the best swordsman in the Empire.

Attack Potency: Wall level (Easily cuts through armored soldiers with a sword. While weaker due to his age, can still fight against Altina and Eddie)

Speed: Subsonic (Moved faster than what regular humans could see)

Stamina: Average. Due to his age, can't fight for long without getting tired.

Intelligence: Genius. Is a master swordsman, considered to be the best in the whole Empire. Was the head of the Balzac House, known for its swordsmanship techniques throughout the whole empire. Trained both Altina and Bastian.

Weaknesses: Due to his age, he gets tired relatively quickly and is weaker than in his prime.

Retrieved from "https://vsbattles.fandom.com/wiki/Baltasar_(Altina_the_Sword_Princess)?oldid=5074355"
Community content is available under CC-BY-SA unless otherwise noted.