VS Battles Wiki
Register
Don't have an account?
Sign In
Advertisement
in: Characters, Lord of the Rings, Demons,
and 32 more

Balrogs (Lord of the Rings) 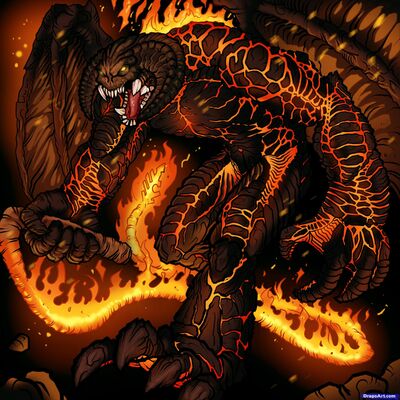 Balrogs, or Balrogath ("Balrog-kind"), were Maiar corrupted by Morgoth during the creation of Arda, who cloaked themselves in shadow and flame and carried whips and swords. Famed Balrogs include Gothmog, slain by Ecthelion, and Durin's Bane, slain by Olórin (Gandalf).

Powers and Abilities: Superhuman Physical Characteristics, Flight, Regeneration (Low-Godly), Immortality (Types 1, 3 and 4), Shapeshifting, Size Alteration, Elemental Manipulation, Fire Manipulation, Weather and Lightning Manipulation (Durin's Bane created a massive thunderstorm during his fight with Gandalf the Grey), Magma Manipulation, Empathic Manipulation (The Ainur can create joy and, by extension, sorrow), Transmutation, Precognition, Invulnerability (The Ainur are immune from harm via conventional weaponry, as seen when, upon unlocking more of his divine power, Gandalf became invulnerable), Resistance to Death Manipulation (In Lord of the Rings the land of the dead is a real tangible place, Mandos, and can be affected and exited. Ainur don't go there upon death, rather becoming spirits until the regenerate. The only way to keep them there is if they are physically brought there and held by physical might), Intangibility and Incorporeality (At the very least in spirit form) | Intangibility and Incorporeality, Reality Warping, Conceptual Manipulation

Attack Potency: At least City level (Durin's Bane managed to do considerable damage to a large mountain during his fight with Gandalf), likely Country level (The Balrogs were consistently stated to be exceptionally powerful and dangerous, and should be comparable to the likes of Ossë) | High Universe level (The Maiar are essentially lesser Valar, having control over aspects of the universe, albeit to a lesser degree)

Speed: Supersonic+ to High Hypersonic | Immeasurable (Existed in the Timeless Halls, a place that transcended linear time and is best likened to a higher temporal dimension)

Lifting Strength: Likely Class T (The Ainur shaped the world, including the mountains. In the Anulindalë Morgoth pulled down mountain ranges made by other Ainur, including, presumably, the Balrogs) | Immeasurable

Durability: At least City level, likely Country level (Durin's Bane survived falling to lower Moria and having an incredibly long fight with Gandalf, who was one of the strongest servants of Manwë) | High Universe level

Weaknesses: Water to a limited extent | None notable

Notable Attacks/Techniques: Like all Ainur, the Balrogs have access to a wide range of dangerous powers, mostly related to the elements.

Throng of flame: The Balrogs can create thongs of flame to entrap and burn their enemies. One of them used this strategy to ensure the victory of Gothmog over Fingon.

Powers of the Ainur: As Maia, Balrogs has access to wide variety of potent and devastating supernatural abilities, for the Ainur were created as elemental spirits, and each have divine authority and absolute control over a certain aspect of nature. Each and every one of the Ainur is also able to manipulate magical energies and reality to serve their needs, and take any form they wish, even intangible and non-corporeal spiritual forms.