VS Battles Wiki
Register
Don't have an account?
Sign In
Advertisement
in: Tier 7, Tier Low 7-B, Tier 6,
and 61 more 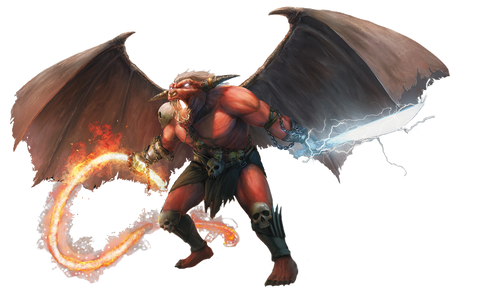 Balors are powerful demonic lieutenants, and are considered the strongest demons save for their lords. They rule over demonic armies and actively seek to ascend to the position of lord (a notable success story in this department being Orcus). They are adept fighters and, in the vacuum left by no lord, often feud among each other for control for Abyssal layers.

Powers and Abilities: Superhuman Physical Characteristics, Abstract Existence (Type 1, As outsiders, Demons are purely abstract in their physiology, only maintaining an illusion of fleshy existence), Chaos Manipulation/Law Manipulation (Demons play into the multiversal balance of Chaos and Law; they are formed from Chaos and their mere presence raises levels of ambient chaos, thus causing chaotic effects to take place. With enough of an upset balance, entire planes of existence can be sent careening into the Abyss), BFR (Anything a demon eats is sent to the Abyss), Fear Manipulation, Memory Manipulation (The insides of demons generate "blood", a black viscous material that, when it comes into contact with an enemy, induces supernatural fear and short term memory loss), Social Influencing, Corruption (Types 1 and 2), Soul Manipulation (Demonic interaction rends the soul and corrupts the flesh), Immortality (Types 1, 3, and 4; Outsiders, when slain outside of their home plane, will drop their essence back into their own plane of existence to be reborn, typically a century later for lesser Outsiders and potentially instantly otherwise), Blood Manipulation (Blood spontaneously appears in the presence of demons, oozing from walls and filling structures), Spatial Manipulation (Mazes conjure spontaneously in the presence of Demons, buildings can possess larger insides than outsiders permit), Weather Manipulation (Weather is affected by the Chaotic upset of a demon's presence, causing effects such as blizzards in the middle of summer or earthquakes away from fault lines), Power Modification (Demons cause magical powers to become slightly modified in their presence, giving them a sickly, corrupted look), Death Manipulation (Plants and animals die for inexplicable reasons when in the same biome as a demon), Disease Manipulation (Creatures of good or lawful alignments may become sickened or ill at ease when in a Demon's presence), Animal Manipulation, Biological Manipulation (A demon can warp the creatures in the area into dire forms of itself, becoming stronger and meaner), Possession (Demons of even lower stature can possess enemies to take control of them), Incorporeality (Demons become insubstantial wisps whilst attempting to possess enemies, being unable to be touched even by other spiritual creatures), Astral Projection (Demons can project freely onto the Astral Plane), Mind Manipulation (Demons possessing a foe can take over their minds), Sense Manipulation (Aside from the target's mind, a demon can hijack a target's senses), Transformation (Possessed creatures can have their physiologies altered into those of demons over a course of days), Curse Manipulation and Statistics Reduction (Demons who take the role of a Corrupter Demon can, upon possessing a target or object, bestow curses with a touch, inducing severely reduced stats and capabilities), Power Bestowal (An Enhancer demon can bestow abilities upon an object it possesses, making it far stronger with various magical effects), Telepathy (All demon types maintain telepathy), Flight, Magic, Reality Warping, Teleportation, Self-Destruction, Explosion Manipulation, Fire Manipulation, Summoning, True Sight, Magic Nullification, Whip and Sword Mastery, Damage Reduction, Aura of Flame, Stealth Mastery, Status Effect Inducement (Including dazed, paralyzed, entangled, etc), Statistics Reduction, Madness Manipulation (Type 2), Telekinesis, Unholy Manipulation, Statistics Amplification, Regeneration (Low-Godly), Hellfire Manipulation, Dimensional Travel, Electricity Manipulation, Vorpal Attack, Self-Sustenance (Types 2 and 3), Extreme Resistance to Soul Manipulation, Magic, Reality Warping, Poison Manipulation, Fire Manipulation, and Earth Manipulation

Attack Potency: At least Small City level+ (Far superior to Legendary Dragons), possibly Island level+ (Roughly comparable to the Elemental Princes such as Imix, who can create deserts passively around him)

Durability: At least Small City level+, possibly Island level+ (Can tank attacks from beings comparable to themselves, including other Balors, who are already massively above the legendary dragons mentioned above)

Stamina: Infinite, no mention of a Balor ever resting or requiring rest is ever made- they are only known to retreat when it is wise to do so and will otherwise battle until they die

Range: Dozens of meters to hundreds of meters with magic, universal with teleportation

Weaknesses: Damage reduction is negated by cold iron and good-aligned weapons, can be killed permanently when on the Abyss, their BFR only works on themselves and items